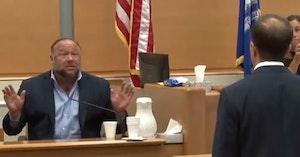 The conspiracy theorist is still dealing with lawsuits from parents of Sandy Hook children after all the time he spent pushing the lie that the shooting, which left six adults and 20 young kids dead, was a hoax. At this point, the only question that remains is how much he will have to pay each family involved in the suit in damages.

Things took an explosive turn on Thursday, when Jones threw a fit in the middle of the trial while being questioned by a lawyer for the families for the victims.

After turning things political and ranting about liberals on the stand, Jones was asked by the lawyer to show some respect to the families sitting in the court room.

“Is this a struggle session? Are we in China?” a disaffected Jones replied. “I’ve already said I’m sorry a hundred times, and I’m done saying I’m sorry.”

He immediately contradicted himself, insisting he thought the shooting may have been staged and “I stand by that and I don’t apologize for it.”

Jones’s outburst prompted a response from the judge, who warned Jones “this is not a press conference, this is clearly not your show,” and reprimanded his lawyer as well.

People watching the trial at home or reading about it online were as appalled at Jones’ behavior as ever, although no one seems surprised at this point.

His last defamation trial didn’t go so well either, in part because Jones’s lawyer accidentally turned over all of his cell phone records, including his text message history, to the other side.

While the judge in this case may have been clear that the InfoWars host isn’t performing on his show for an audience, the trial still certainly has one. The difference is that Jones just doesn’t get to shape the narrative to suit him this time around.