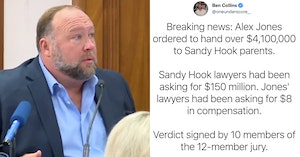 In a disappointing turn of events, rightwing conspiracy theorist Alex Jones was ordered to pay $4.1 million to parents of a child killed at Sandy Hook Elementary School in 2012, significantly less than their lawyers were seeking.

Jones is being sued by multiple Sandy Hook families after the years he spent spreading lies about them, calling them crisis actors and suggesting that the tragic mass shooting of elementary school children was nothing more than a “hoax.”

Last November, he received a default judgment in the lawsuits brought against him, due to his “willful noncompliance” in failing to hand over documents that had been requested multiple times by opposing counsel. This week, the end of a jury trial regarding how much he would have to pay one of the families saw his lawyers accidentally hand over years’ worth of text messages, proving he lied under oath, and get denied for a mistrial a staggering number of times.

At the end of it, the jury opted to only award $4.1 million in compensatory damages to Neil Heslin and Scarlett Lewis, whose 6-year-old son, Jesse, was among the murdered children.

The family had sought $150 million, citing the ongoing harassment and death threats they’ve received over the last decade due to people believing this lie that the Sandy Hook shooting was staged.

“It seems so incredible to me that we have to do this, that we have to implore you, to punish you, to get you to stop lying,” Lewis told Jones during the trial. “I am so glad this day is here.”

One of the reasons the amount may have been so much lower than what was requested involves Jones telling the jury that he was bankrupt — something the judge reprimanded him for doing, as that has not been factually determined yet. Critics have accused Jones of moving money around and having his companies file for bankruptcy in an attempt to dodge financial responsibility for these lawsuits, whereas attorneys for the plaintiffs showed that his Infowars store alone made over $165 million between 2015 and 2018.

The jury is still deliberating on how much Jones may have to pay Helsin and Lewis for punitive damages, a number they are expected to come back with on Friday.

Jones is still facing two additional trials to determine how much he will have to pay other Sandy Hook families.