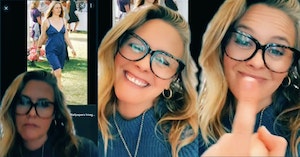 In her long career, Alicia Silverstone has received a whole lot of scrutiny over her body, which is not that unusual for a Hollywood starlet making films. Things might be a little better now (though not much) but they were really bad when her famous film Clueless came out in 1995. Silverstone is extremely slim, but she doesn’t look emaciated in the way gossip tabloids expected blondes of the nineties to be—and so she was labeled as fat by some extremely delusional critics.

Silverstone has talked about the comments she’s received before, most recently in a 2020 interview with the Guardian, where she said, “They would make fun of my body when I was younger. It was hurtful, but I knew they were wrong. I wasn’t confused. I knew that it was not right to make fun of someone’s body shape. That doesn’t seem like the right thing to be doing to a human.”

Now, with more life experience, Silverstone doesn’t hold back. In a new TikTok that’s been viewed over 4 million times, Silverstone shares a photo of herself in a blue sundress that’s captioned, “Alicia Silverstone Candid Fat Photo.”

She flips the bird at the camera, clearly intending it for whoever wrote that caption. In her own caption on TikTok, she wrote, “Damn. I think I look good  #abcdefu.”

Recently, the criticism Silverstone’s body used to receive has been a topic of conversation on TikTok and she dueted a user named @foreversymone who made a video about how when she played Batgirl in 1996, Entertainment Weekly compared Silverstone’s body to Babe the Pig in a piece titled “A Weighty Issue.”

She looked good then and she looks good now and everyone knows it!