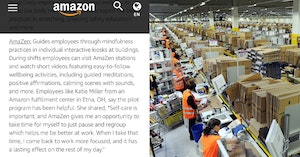 Amazon is reportedly rolling out what it claims to be a workplace safety program designed to reduce injury rates and sudden deaths among its warehouse workers, which are rather high compared to other companies. This is often attributed to the brutal pace that the company’s lowest-paid employees are expected to work under threat of firing as well as increasing automation that can result in horrific accidents.

Rather than slowing this pace or allowing workers to unionize, Amazon will be requiring daily staff meetings with videos on health and safety and “mindfulness kiosks” as part of a program they’re calling “AmaZen.” These kiosks will be placed in the warehouses and play videos that Amazon claims will provide “guided meditations, positive affirmations, [and] calming scenes with sounds.”

The meetings and kiosks are part of a $300 million investment into workplace safety supposedly invested by the company this year and says that the overall “Working Well” scheme has been tested with 859,000 employees at 350 sites in North America and Europe. The claim is that this will cut workplace injuries by 50 percent by 2025, which is a lofty promise considering the report released in 2020 that counted around 14,000 serious injuries among Amazon warehouse workers in 2019 alone.

Amazon says they have been working on this program since 2019, but they do not seem to have explained to anyone when their warehouse workers are supposed to take the time out of their shift to stop at these kiosks whether they feel stressed or not. One of the most commonly cited problems with Amazon warehouse jobs is the productivity ratings that constantly track their movement and work activities, pushing them to maintain an exhausting pace that doesn’t even leave them with time to go to the bathroom.

Dropping below a certain productivity level gets you yelled at by supervisors or fired. Workers have also complained that there aren’t enough bathrooms in the warehouses to accommodate everyone on their short breaks. Between needing to eat and having to stand in line to empty one’s bladder, it seems unlikely that everyone who needs de-stressing will get access to one of these kiosks even during their downtime.

Aside from all those problems, people on Twitter are also widely comparing this program to dystopian science fiction. It doesn’t help that the supposed quote from an alleged Amazon employee sounds like it came out of a robot programmed to defend Amazon from criticism.