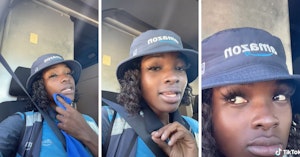 ‘Just Take The Package, It’s Not That Hard’—Amazon Delivery Driver Calls Out People Who Hide From Deliveries

A frustrated Amazon delivery driver posed a question to the people of TikTok, asking why her customers flee into their houses whenever they see the delivery truck trundling down the road.

TikTok user Bri, aka @itsbribellaa, said with a laugh that customers that are doing yard work or hanging out outside their homes habitually run inside with a certain amount of “quickness” that baffles her.

“Like, come get your f-cking package. I don’t know if that irritates me more than anything, but like, why walk in your house or close your garage door when you see us Amazon delivery drivers coming to you guys? Just take the package. It’s not that hard,” she said.

The people of TikTok gave Bri a variety of responses for why they avoided their delivery drivers. Some had the very real concern of the ongoing pandemic — which certainly makes sense, given that Palm Beach County continues to average around 307 new cases a day and Florida as a whole continues to average 2,357 hospitalized daily, according to statistics by the New York Times.

Other folks on the social media app gave other reasons for their hasty retreat inside, from introvertedness to misunderstanding how package delivery works.

“Because I’m an introvert I don’t do people,” one person commented.

Another TikToker replied, “I dunno y I do this…but I thought legally yall have to.drop it at the door.to take the picture so we just letting yall do.ur job..”

Still others replied that they were trying to hide the package deliveries from their spouses, which made the delivery driver laugh.

Said one commenter, “Don’t want my husband to know you are coming to our house again! Just drop and go, Fast!!! 😅”

Some of the nastier commenters rudely claimed that Bri was being lazy and needed to “do [her] job.” In a video response, the driver rebutted the commenter’s claims of laziness.

“One, I’m not being lazy, okay? Two, I live in the state of Florida. As of right now, it’s about 91 to 98 f-cking degrees and it’s about four o’clock where I’m at. So technically, I’m not being lazy if I’m still doing it,” she said. “What you all fail to understand is I get to work at about nine o’clock and I don’t leave until about seven or eight o’clock at f-cking night. So I’m here, basically slaving, every day.”

She said it would be nice for customers to be a little more self-aware and show some “generosity” to their delivery drivers, especially when it comes to large and bulky items.

“If you see me and you know you have multiple packages coming to your house, just have the common courtesy to be like, ‘Alright, let me help her out a bit. I see I’ve ordered a lot. I can help her,’” Bri said.