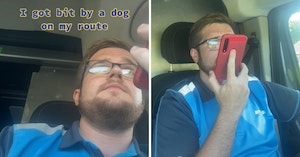 An Amazon delivery driver posted a TikTok video of himself calling the company’s emergency support line (after being passed from dispatch to the driver support line) after he was bitten by a dog on his route and needed medical care. He says that the emergency line person asked him a series of unnecessary questions as he waited to find out whether he could go to the hospital to get treatment for his wound, and then his manager asked him to finish his delivery route first.

This is standing out as yet another example of the extremely poor manner in which Amazon treats its employees. Dog bites are serious injuries as the puncture wounds from their teeth can cause rapid and severe infection, and though the risk is small, the danger of rabies still exists.

Rabies is an extremely dangerous illness that progresses rapidly, and by the time human victims begin showing symptoms, it is almost always too late to save them. We cannot stress this enough—if you’re bitten by an animal and can’t be sure it doesn’t have rabies, go to the hospital immediately.

Somebody clearly needs to stress this to Amazon, however, after the way they treated TikTok user Justin Baker.

“So, I called my dispatcher but he told me I had to call Amazon driver support,” says Baker in his video. “And they told me they couldn’t help me. And then I had to call emergency support and they put me on hold for 10 minutes.”

After he called the emergency line, a woman’s voice can be heard on speaker phone but is difficult to understand. Baker reports that she asked him a number of strange questions such as what kind of shoes he was wearing. She also asked him if he was driving a plain white van or a branded Amazon van, which kind of sounds like they were more concerned about Amazon’s image than the health and safety of the worker.

And it doesn’t seem like they were very concerned at all.

“After this call, I called my manager and they asked me if I could finish my route before I went to the ER,” said Baker.

This in itself is bad enough, though not entirely surprising from the company that made its warehouse employees continue to work through a tornado warning, resulting in the deaths of multiple workers after the storm hit and collapsed part of the building.

In comments, Baker reports that it took him six months and action from the state government to get Amazon to cover his medical bills from the bite and pay for worker’s compensation while he recovered from the on-the-job injury.

Baker has dedicated much of his TikTok account to showing the world the perils of delivery driving for Amazon, speaking in other videos about how it took him six months of badgering just to get a replacement pair of uniform shorts. Another shows how the door on his van won’t close, which seems like it would pose a serious problem.

Amazon has maintained a stranglehold on the U.S. with its massive monopoly, continuing to dominate the goods shipping industry even as it gets wave after wave of bad press and every day people say they don’t want to do business with them anymore.

“I have stopped buying from Amazon,” said a commenter on Baker’s popular video. “It doesn’t feel right supporting a company that has had many opportunities to change but refuses to.”

Others had their own horror stories about working for the company and getting injured on the job.

“Some guy got in an accident doing Amazon deliveries he called his mom to drive him to the hospital,” wrote another commenter. “No lie Amazon support asked if his mom could drive him around and help him finish the deliveries.”