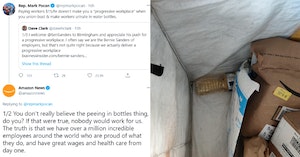 Amazon got itself into more trouble than they needed to be in when the Amazon News account on Twitter started replying to tweets that criticize the company. One particular reply to Rep. Mark Pocan of Wisconsin caught attention for accusing Amazon employees of lying about having to urinate in bottles to get through the day without being fired because their “productivity” was too low.

This started because Amazon’s consumer CEO Dave Clark tweeted a “welcome” to Senator Bernie Sanders, who is going to Alabama to meet with the unionizing Amazon workers there, and claimed the company provides a “progressive workplace.”

Many workers in Amazon warehouses have reported difficulty finding the time to get to the bathroom when they need it, facing productivity penalties if they go on the clock and long bathroom lines during breaks. Additionally, contract drivers for Amazon have reported little option but to pee in bottles or other containers during their shifts due to zero access to bathrooms.

Rather than addressing this problem, Amazon has apparently decided to accuse all of these workers of being liars.

In reality, people have worked in terrible conditions for centuries in order to survive, including in sweatshops to this very day, so the bottle peeing thing is perfectly believable. Knowing this, Twitter users thoroughly ratio’d Amazon News’ reply, tweeting links to articles with evidence that the Amazon pee bottles are, in fact, real, as well as other horrific work conditions.

The Vice report digs through social media and Reddit posts showing not only confessions from Amazon delivery drivers about peeing in bottles and Pringles cans but photos of these very items, sometimes visibly full of urine. One, in particular, was from a specific forum for Amazon’s drivers.

These workers are now openly reporting this cruel necessity all over the forums and conspiring to post photos of their own “pee bottles.” Vice also points out that it’s clear the company is well aware of this problem considering the fact that they recently passed a new policy for drivers that threatened termination for “public urination, public defecation, and public indecency.”

Meanwhile, back on Twitter, non-Amazon employees are keeping up the important work of mocking the company into the ground.