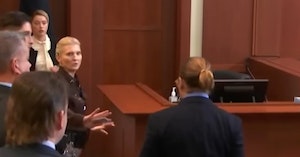 Amber Heard’s testimony in the defamation hearing between her and Johnny Depp began last week, and after one instance of the actress taking the stand, she had a very strong reaction when she almost walked up to Depp.

The Aquaman actress had just finished her testimony and the trial had gone into a recess. When Heard stepped off the podium, she visibly recoiled when she realized that Depp was mere feet away from her.

There were several bodies between them, but Heard flinched and backed into a corner of the room at the sight of Depp, who was seen talking to his entourage, and the courtroom officials stepped between the pair, motioning for Depp to wait for Heard to return to her seat.

Depp simply smiled and shrugged his shoulders at the brief exchange and stepped back as requested before leaving the courtroom to take a smoke break during the court’s 15-minute recess.

Prior to the exchange, Heard was on the stand to testify about the alleged sexual and physical abuse she said she experienced at Depp’s hands in Australia in 2015.

She said under oath that Depp shouted at her and pinned her down on the kitchen bar. Heard added that she never saw his severed finger, which the court has seen photographic proof of during Depp’s testimony, as well as eyewitness accounts of the aftermath from his security guard.

Heard told the court, “At some point he’s on top of me, screaming I f–king hate you, you ruined my f–king life.”

“I’m on the countertop, he had me by the neck and was on top of me,” she said through tears. Heard went on to say that she had never “been so scared in my life” and at the time, tried to “get through to Johnny.”

Depp’s legal team was unimpressed with Heard’s version of the events, saying that they were fabricated and the “performance of her life.”