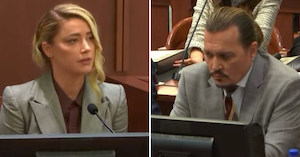 As the defamation trial between Johnny Depp and Amber Heard wraps up, Heard took the stand again on Thursday to testify as to how the trial has affected her life. She shared that she (and her child) have received daily death threats and that she has suffered extreme stress ever since Depp and his ilk began a concerted launch of harassment against her. Some of the alleged daily harassment she faces includes people wanting “to kill me” and “put my baby in the microwave.”

“The harassment and the humiliation, the campaign against me that’s echoed every single day on social media, and now in front of cameras in the showroom — every single day I have to relive the trauma,” Heard said. “Perhaps it’s easy to forget I’m a human being.”

Heard also shared how her friends, intimate partners, doctors, and movie crews have to “live with a set of unspoken rules about how not to scare me” due to the “damage” she has experienced and “survived.”

Heard previously testified that Depp physically and sexually assaulted her during their six-year relationship. Heard also implied that Depp said he would basically punish her in perpetuity. She said Depp has been fixated on getting revenge on her ever since she filed for divorce and obtained a restraining order against him.

“Johnny has taken enough of my voice,” she said. “I have the right to tell my story.”

Heard also noted that she’s taking the situation seriously and is going through a great deal of pain: “I’m not sitting in this courtroom laughing, smiling, making snide jokes…This is painful. This is humiliating for any human being to go through.”

She added that “even though Johnny promised that I deserved this and promised to do this, I don’t deserve this. I want to move on.”