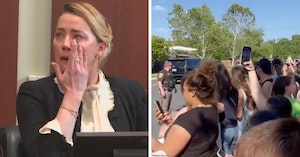 Fans have flocked to the Virginia courthouse where the Amber Heard and Johnny Depp defamation trial is underway to show support — but also, apparently, to heckle the actress.

New footage shared on Twitter by Chanley Shá Painter, a legal correspondent for CourtTV, showed the crowd of spectators outside the courthouse on May 17 waiting for the two actors to leave for the day. The first clip shows people cheering and shouting encouragement to Depp and waving handwritten signs around, as he leaves in a vehicle that has tinted windows for privacy.

In the short video, the Jack Sparrow actor rolls down his window to wave and smile at the crowd, whose cheers grow louder as he passes them by on the street. Many of the members of the crowd carry signs proclaiming their support of him, and there is even a cosplayer dressed as Depp’s Captain Jack Sparrow from the Pirates of the Caribbean franchise.

This is in stark contrast to the scene when Heard is seen exiting the courthouse, which Chanley shared in a second tweet about 20 minutes after the first.

Heard isn’t visible in the vehicle, and unlike Depp, there is no waving at the crowd as she is driven by. It’s clear from the crowd’s attitude, however, that they realize who is in the car, as they begin to hurl verbal abuse at her.

Members of the crowd can be heard shouting that she is a “gold digger” and a “liar,” while another Depp fan shouts, “Where’s the money?” at her. This is most likely in reference to the $7 million divorce settlement money she had promised to donate to the ACLU and the Children’s Hospital of Los Angeles.

The video switches to a second clip of a vehicle driving out of a gate further down the road, seemingly to avoid the crowd, that can be assumed to be the one with Heard in it. The clip ends with the crowd booing as the car drives away from the courthouse.

These two clips were from the same day that Heard testified in court about the abuse she received from Depp’s fans after her first accusations in 2016 that the actor was “verbally and physically abusive.”

The day before, Heard told the court that she struggled in her career after coming out with the accusations, dealing with backlash and “vitriol from the media and Johnny Depp’s supporters.”

“It was hard for me to work. I was harassed. I am harassed on a daily basis, death threats,” she said.

“At the time, I thought it couldn’t be worse,” Heard went on. “Obviously now, from where I sit today, I know it gets a lot, a lot worse.”