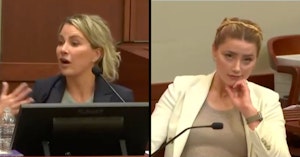 On Tuesday, Johnny Depp’s legal team called expert witness Dr. Shannon Curry to the stand, a clinical and forensic psychologist who was hired to review Heard and Depp’s relationship. She told the jury that based on her analysis, Heard suffers from Borderline Personality Disorder (BPD) and Histrionic Personality Disorder (HPD).

Curry was initially hired to review case files and identify any behavior consistent with “intimate partner violence” but that role shifted when she gave Heard a psychological evaluation in October 2021, revealing BPD and HPD.

BPD is a “mental health condition in which a person has long-term patterns of unstable or turbulent emotions.” This negatively impacts relationships. HPD, meanwhile, causes “dramatic” characteristics, and those people “have intense, unstable emotions and distorted self-images.”

Curry said that Heard’s BPD evidence by her “underlying terror of abandonment” and “desperate attempts” to stop that from happening.

“You’ll see relationships start very intensely, extremely close,” she said. “This might be their perfect soulmate and initially everything seems great but reality sets in, people are not perfect.”

“Most of us accept people as a whole, [but] with a person with BPD, things are in these extremes, that person goes from being idealized to dumpster, they are totally devalued, they’re the worst….then there will be a repair because the person with this disorder does feel remorse.”

Heard was quiet throughout the testimony, took notes, and at one point rolled her eyes at the diagnosis.

Curry went on, saying that Heard’s BPD was “sophisticated” and “calculated.” She said, “[People with BPD] take on the personality of the people they want to be around. The way they dress. Interest. The way they talk.”

Curry said that Heard’s HSD was marked by an “overly dramatic presentation” with “quick shifts between emotions.” She also said that HPD causes someone to have “hypersensitivity to being slighted” and always needs to be the center of attention.

“They will make a lot of accusations, reactivity, a lot of escalation, they can react aggressively, physically prevent partners from trying to leave. Often they will be abusive to their partners, sometimes physically restrain them.”

She also added that Heard “grossly exaggerated” her post-divorce PTSD.

Curry said that Heard claimed 19 out of 20 PTSD conditions, but that she was in the 98th percentile for exaggerating PTSD symptoms. She determined that the actress only suffered from 3 of 20 symptoms, which were sleep disturbance, a prolonged feeling of being startled, and recurring nightmares of being “held down.”

However, Curry said, there was evidence of these symptoms prior to Heard and Depp’s rocky relationship. Heard said she suffered from “blanket anxiety and depression” when she moved to LA.

Curry ended by saying that Heard was “very likable” in their interactions, but she approached testing “in a manner that very clearly minimized any psychological dysfunction but presented herself as free of problems and did so in a way that was not obvious.”

In the cross-examination, Curry admitted to having a 4-hour dinner interview with Depp’s legal team before being hired, and that she thought he was a good actor.

Curry insisted that she was interviewed by Depp’s legal team, not the actor, to determine her qualifications.