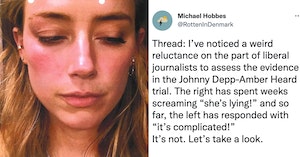 The Johnny Depp and Amber Heard defamation trial has become a divisive talking point on social media — to the extent that people are harassing and threatening those who have divergent opinions. Most of the harassment has come from very intense Depp fans, who flood social media accounts — many of them bots.

Vice did an enlightening piece showing readers how The Daily Wire, a conservative media outlet, has spent thousands of dollars promoting misleading anti-Amber Heard articles and one-sided videos and memes mocking a woman who alleges she suffered domestic violence.

But it’s not just conservative media. Journalist and podcast host Michael Hobbes raised some interesting questions about coverage in general, and his thread went viral.

“I’ve noticed a weird reluctance on the part of liberal journalists to assess the evidence in the Johnny Depp-Amber Heard trial. The right has spent weeks screaming ‘she’s lying!’ and so far, the left has responded with ‘it’s complicated!’ It’s not. Let’s take a look,” the user writes.

The user focuses on one of the more infamous parts of the trial — whether or not the dog or Amber took a crap in the bed: They note that it essentially doesn’t make sense that Depp would come home to feces in the bed because he hadn’t even been sleeping in their home: “(Not that it matters here, but Depp’s accusation makes no sense. Their dog had pooped in the bed before and Depp was staying in another of their homes at the time. Why would Amber shit in the bed to get back at him if he wasn’t even sleeping there?)”

Depp fans keep asserting that Heard must have faked all her injuries. Heard did what domestic violence victims are encouraged to do: document the abuse. Take photos. Write notes. It’s one of the best things to do if you’re being abused, and often people are too upset, stressed out, or fearful to do those things — which is then used against them. But Amber did document those incidents, and it’s being used against her.

“But anyway, Depp thinks Heard’s friend iO Tillett Wright was responsible for the poop incident and forces her to call him. Wright denies the accusation and Depp blows up. He throws the phone at Heard, hitting her in the face,” @RottenInDenmark writes. “Heard’s friends documented her injuries shortly after the fight. Metadata confirms the date and time these were taken.”

What does Depp say? The Twitter user says “Heard is faking everything. She Photoshopped pictures to appear injured, smashed up their apartment herself and talked her friends into supporting her account. He admits leaving his phone at the house, but says he didn’t throw it.” Essentially, argues the poster, this is Depp’s “conspiracy theory.”

The Twitter user suggests that there’s a lot of low information articles out there now simplifying things and promoting Depp. It’s really hard for Depp fans to see their hero, a man who for sure has done good things for others, also potentially being exposed as someone who abused his wife. “Heard’s narrative aligns with all the evidence: A guy with a history of misogyny, jealousy and violent outbursts brought that pattern into his marriage,” they write.

As the trial continues, there will be more polarization. But whatever happens, the trial is important for our country not only because it demonstrates how #MeToo is evidently dying but also because it could affect how survivors tell their stories in the future.