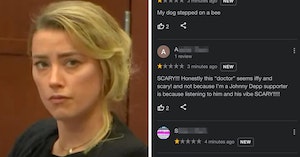 As the Johnny Depp and Amber Heard defamation trial reaches its final days, it is clear that the public has made their own opinions known — by review-bombing expert witnesses who testified in support of Heard.

NBC News journalist Kat Tenbarge took to Twitter to share examples of reviews fans of Johnny Depp have left for psychiatrist Dr. David Spiegel. Spiegel recently took to the stand in the Virginia courthouse, claiming that Depp exhibits “behaviors that are consistent with someone that both has substance-use disorder as well as behaviors of someone who is a perpetrator of intimate-partner violence.”

The one-star reviews shown in the tweet are all from people watching the trial unfold online, and not Dr. Spiegel’s actual patients.

“SCARY!!! Honestly this ‘doctor’ seems iffy and scary! and not because I’m a Johnny Depp supporter is because listening to him and his vibe is SCARY!!!!! [sic]” one person wrote in their review.

Other reviews say that based on his testimony, they would not “recommend” Dr. Spiegel to anyone. Others commented nonsense, such as “My dog stepped on a bee,” in reference to a repugnant meme that had been made from Heard’s own testimony.

Dr. Dawn Hughes, a forensic psychologist who also testified on Heard’s behalf, has seen similar reviews left for her online. Dr. Hughes stated in court that Heard was suffering from PTSD as a result of the alleged intimate partner violence she experienced.

Reviews left for Dr. Hughes claimed that she was sexist and biased towards women, claiming that she thought men could never be victims of domestic abuse.

In Dr. Spiegel’s testimony about Depp’s substance abuse, he also claimed that Depp used an earpiece because of blunt memory due to that drug abuse.

Dr. Spiegel said this was common practice, especially for those, like Depp, who would frequently forget their lines.

One of Depp’s attorneys, Wayne Dennison, asked Dr. Spiegel, “Do you know whether Marlon Brando used an earpiece?”

Dr. Spiegel responded, “Isn’t he dead?” Dennison, of course, agreed with him that Brando was dead.

Dr. Spiegel then replied, “So, the answer is no then. He does not use one now.”

Dennison clarified that he had used the past tense when asking about Brando.

Heard isn’t the only one to bring in expert witnesses to diagnose disorders for the court.

Near the beginning of the trial, Depp’s lawyers brought in Dr. Shannon Curry, who told the court that heard showed signs of both Borderline Personality Disorder and Histrionic Personality Disorder, and that her PTSD did not stem from Heard’s relationship with Depp.