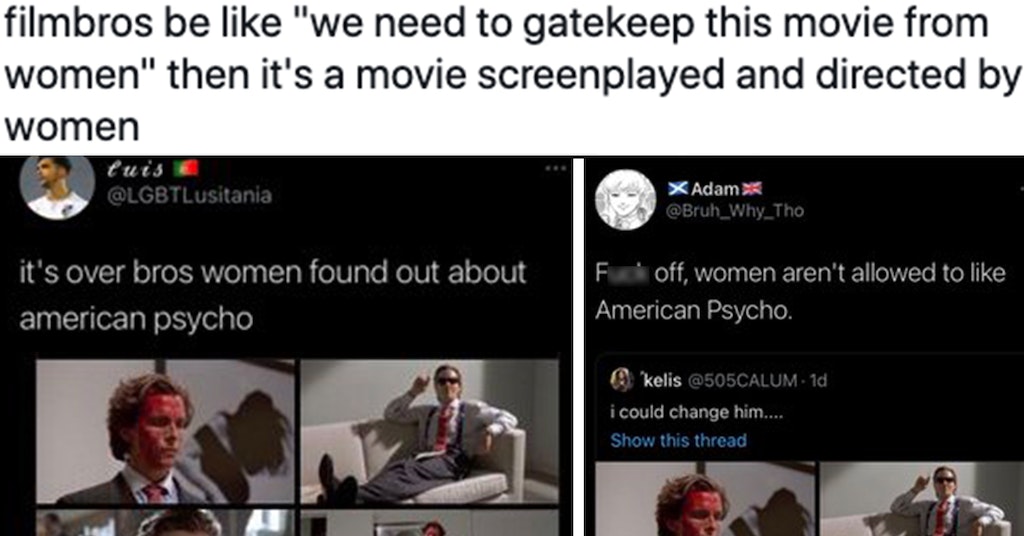 People are dunking on “filmbros” after some guys started complaining that women have finally discovered American Psycho — a movie that might be based on a book by a man, but that was ultimately both written and directed by women.

The whole nonsense kicked off when @505CALUM made a post that clearly wasn’t supposed to be taken at face value, featuring bloody screencaps of the film’s murderous protagonist, Patrick Bateman, alongside the caption “i could change him…”

As the post picked up traction, the aforementioned “filmbros” started retweeting it bemoaning that women have started watching the movie they are apparently obsessed with and likely fail to understand themselves.

Of course, anyone who knows anything about American Psycho beyond simply over-identifying with Christian Bale’s Bateman knows that it was directed by Mary Herron, from a script co-written by Herron and Guinevere Turner. So unless you’re a novel purist (and let’s be real, these guys definitely aren’t), what you actually love here is a movie made by women.

The delusional attempt at gatekeeping prompted a number of dunks on all the dudes trying out their own tired brand of toxic masculinity on Twitter.

Really though, if you’re going to try to gatekeep something, it probably shouldn’t be something that’s been incredibly mainstream and popular for literal decades.

The idea that movies of any type can only be liked or understood by one gender is, of course, the kind of smooth brain logic that doesn’t hold up to an ounce of criticism, but if any gender were to be able to lay claim to American Psycho…sorry film douchebros, it wouldn’t be you.