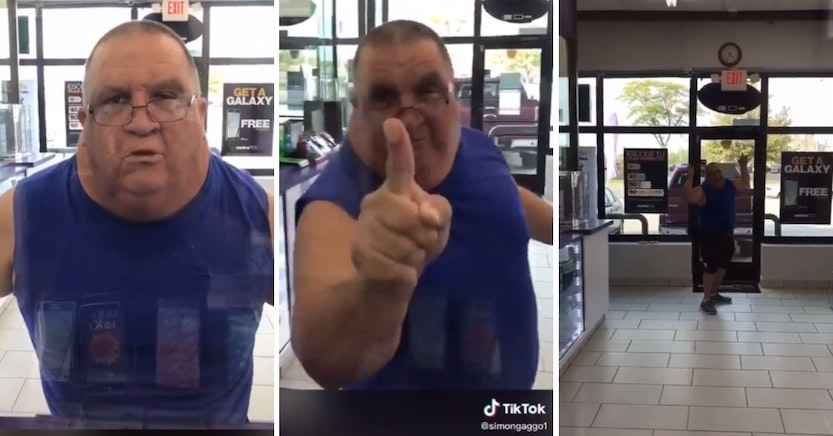 A Detroit man was caught on film storming around a Metro PCS store issuing violent threats and generally throwing a tantrum, all without wearing a mask, in a video that soon went viral on TikTok and Twitter. Thankfully, there were no other customers in the store.

TikTok user Simongaggo first posted the video on Wednesday asking for someone to “come get their uncle.” It’s unclear exactly what the man’s problem was, but he definitely seemed to be unsatisfied with his phone.

The video starts with the man pounding his phone against the glass or plastic thankfully protecting the employees, and seems to be saying that the phone “ain’t worth s**t.”

The workers are clearly done with the man at this point, blaming him for his technological woes.

The man continues to challenge the employee to an in-store brawl as he’s warned that they plan to show the video to the police. Another man speaking quietly in the background seems to be trying to de-escalate the situation, but it doesn’t seem to work as the customer threatens that they’re “finished in business” and slams his hands down on the counter repeatedly.

“Shove the f***ing phone up your ass,” he says at one point.

The man then threatens to have the whole store shut down, which does not impress the workers.

“Yeah!” the customer shouts as he storms toward the door.

The video has been viewed over 3.7 million times on TikTok and Twitter combined, getting most of these on Twitter as people can’t help but poke fun at this man’s utter meltdown over a phone problem.