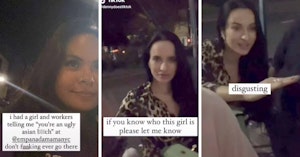 A New York TikToker is calling out a patron and employees of a restaurant after a racist encounter.

Denise Carino (@dennydoesTikTok) turned her camera on after another customer at Empanada Mama started hurling racist slurs at her.

She tells viewers that the other woman told her that “Asian b*tches are ugly,” which the woman confirmed and then repeated several times herself.

“You’re a f—king ugly f—king Mexican, f—king Hawaiian, whatever the f—k you are,” she says.

She also called Carino a “Chinese little b*tch” at another point in the short clip.

Carino said the “worst part was [the other woman’s] POC boyfriend egging her on” and accused two workers at the restaurant of just standing there while this all happened. “Absolutely f—king horrid,” she wrote.

Giovanni Morales, the general manager of the restaurant, told the Daily Dot that security footage and interviews with employees suggest the altercation actually started after Carino, allegedly intoxicated, “refused to follow staff orders and wait for her food outside.”

He accused her of mocking the security guard, and that’s apparently when the other woman decided to step up and escalate things by getting all racist about it.

The security guard has since been fired for not deescalating the situation, and Carino says Morales called her to apologize for what happened.

Of course, the internet still did its thing in seeking out the woman making racist remarks at Carino, and it wasn’t long before someone came up with a name — Brittany Ortiz.

@cynthiainnyc shared video of Ortiz from another encounter where she was fat-shaming people at an ice cream shop, also claiming that she constantly calls to complain about the shop’s Black Lives Matter sign.