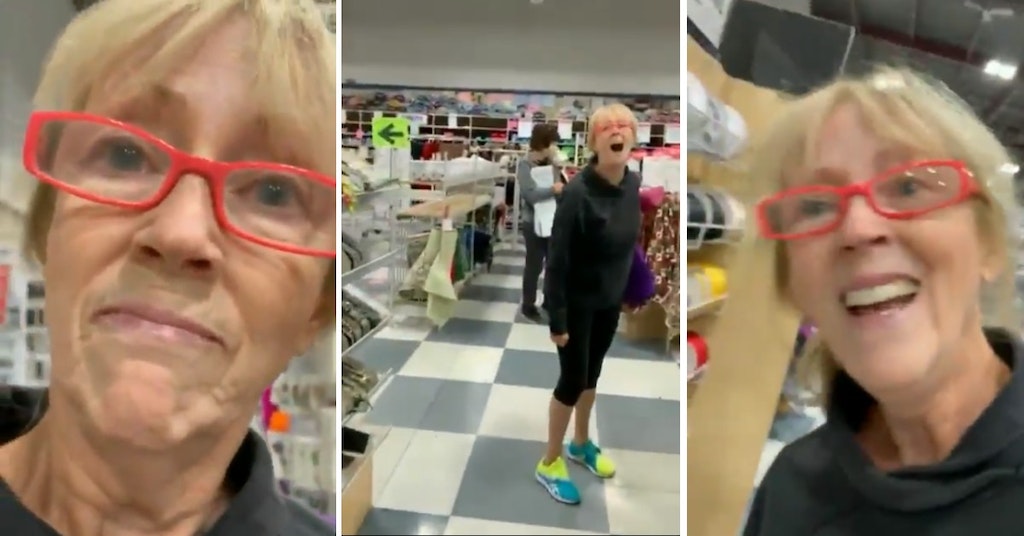 Another anti-masker was filmed being kicked out of a store for refusing to follow the clearly-stated rules, at one point getting aggressively close to the woman recording her and slipping into some bizarre baby talk to mock her for being concerned about getting sick during a pandemic. Another woman who seems to be an employee eventually intervenes, telling the anti-masker to leave, but not before she manages to make herself look like she’s having a nervous breakdown of some kind.

The video was originally posted by avid video-sharer Fifty Shades of Whey, who says it comes from Canada but doesn’t name the store. It starts with the anti-masker seemingly arguing with an employee about the mask rule as the worker as her if she thinks they want to wear a mask, either.

“Yes I do,” the anti-masker replies. “You are a sheep, just like the rest of them. Why don’t you people educate yourselves?”

She then seems to notice that she’s being filmed and comes up very close to the filmer, who is not happy about that.

“How am I doing, am I pretty cute?” the anti-masker asks. “You’re really close to me,” says the woman behind the phone.

“Are you afraid?” says the anti-masker in an artificially high-pitched voice. “You should run away! But you have your super mask on.”

After the filmer notes that she’s trying to protect others by wearing a mask, she objects to the anti-masker touching her, which makes the whole fake voice thing even worse.

“Oh no! I touched you!” the anti-mask woman exclaims with drama. “I’m gonna get COVID!”

The anti-masker starts to walk away but stops when the filmer says that she’s probably the one who’s going to get it from the person not wearing a mask, laughing and mocking her when asked if she’s actually going to leave the store. That’s when she really goes off the rails, repeating “are you going to leave the store” in a high-pitched baby-talk voice.

That’s when the employee intervenes, telling her that she needs to leave because she’s being “aggressive to another customer.” The anti-masker, predictably, plays the victim before making her final speech demanding that everyone in the store give her an apology once “this thing is proven to be a hoax.” She laughs when a bystander suggests she talks to someone who has been sick with COVID-19.

“Nobody has gotten sick,” she says. “Educate yourself. Go online, and read, and learn.”

Having given this advice, she storms out of the store.

As the video spreads, people wonder whether she will ever take her own advice outside of her conspiracy theory Facebook groups.