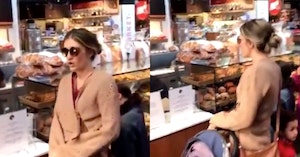 An anti-masker in New York City was caught on camera not only arguing with an employee who refused to serve her without a mask, but calling him the N-word in the process.

Stephanie Denaro was trying to buy bagels at Davidovich Bakery in the Essex Market with at least four children in tow when she was informed she needed to wear a mask to receive service.

Masks are still required to be worn in public in New York, and many businesses have instituted their own requirements on top of that.

By the time the video starts, she’s already up at the counter facing off against the employee, with a security guard off to the side also involved in the conversation.

“Why can’t you wear a mask?” the employee asked.

The security guard responds that Denaro says she has a medical problem, but advises the employee that they still aren’t required to serve her if they don’t want to.

Denaro continues to hold up the line even as the security guard asks her to leave.

At that point, Denaro calls the employee a “b—ch ass” and the N-word.

“You need to go,” the security guard tells her.

In case there was any dispute over what Denaro said, she made sure to clarify for everyone that she did, in fact, just call him the N-word.

Denaro keeps arguing with the security guard and bystanders who call her out on her wretched behavior, repeating that she can say whatever she wants to because “this is America.”

“Who the f—k does that?” someone asks.

“People whose rights are being violated,” Denaro replies.

Denaro actually came forward to identify herself after the video first circulated, defending her use of the N-word to the Daily News.

She also clarified her thoughts on masks and COVID-19, calling it a “hoax to convince people to use absentee ballots to steal the election from Donald Trump.”

In an Instagram screenshot captured by the Daily Mail, Denaro allegedly claimed she is Black because her ancestry results list her ethnicity as 39% Nigerian.

It sounds like Denaro may need a few pretty basic things about racism and how elections work explained to her, but it doesn’t seem likely anyone will be volunteering for that job any time soon.