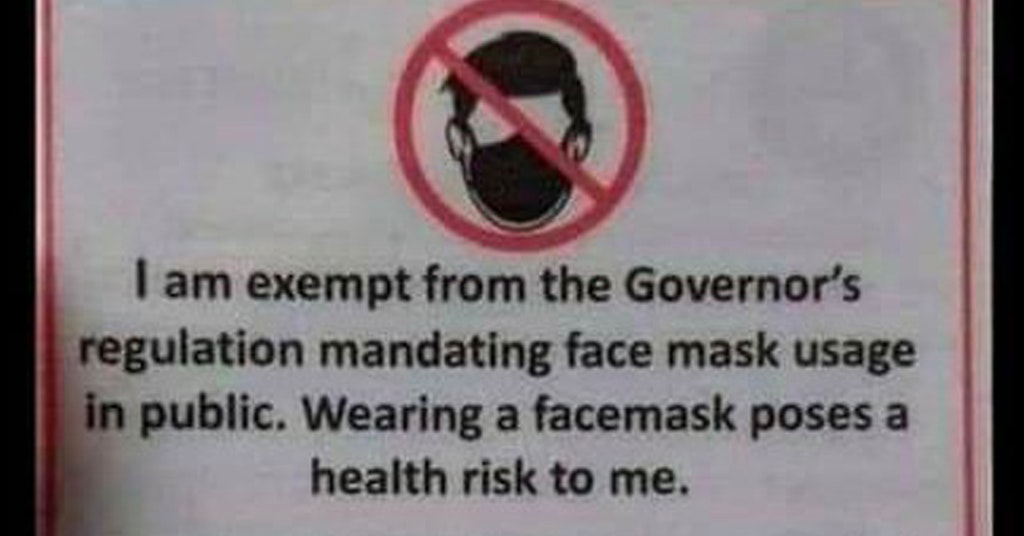 In the United States, being asked to wear a face mask in public for the safety of the entire population has become absurdly controversial. While most people seem to be complying, fringe groups have declared that such a request tramples on their freedoms.

Some people are not only refusing to wear masks, but insisting on makinig spectacle out of it, even going to privately owned businesses and picking fights with employees who are tasked with enforcing company policies.

Protestors seem to be organizing online and sharing tips and tricks for not only getting away with going maskless, but also for getting into confrontations over it.

One particular method circulating among these groups is the idea that they can falsely claim they have a medical condition and any store manager’s hands will suddenly be tied, thanks to laws preventing them from asking about specific disabilities.

“I am exempt from the Governor’s regulation mandating face mask usage in public. Wearing a facemask poses a health risk to me,” reads a card being shared by those intending not to wear a mask. “Under the ADA and HIPPA, I am not required to disclose my medical conditions to you.”

This form of protest is not sitting well with people who understand why those laws are in place to begin with.

It’s an attempt to abuse a system set in place to protect people with disabilities and/or specific medical conditions from being discriminated against.

And it’s also unlikely to get the results the protestors want.

For starters, HIPAA (Health Insurance Portability and Accountability Act of 1996) is a law that forbids medical professionals from disclosing sensitive patient information without consent, and just straight-up has nothing to do with the situation at hand.

The ADA (Americans With Disabilities Act of 1990) is a little more complicated, but ultimately, it requires “reasonable” accommodation, meaning that, in scenarios where store employees are still willing to shop for maskless customers, they should be within their rights to not let them inside the store.

Moreover, if the accommodation would endanger other customers or employees (aka letting them in without a mask during a pandemic), the law may not apply.

And protestors faking disabilities can’t sue for being denied entrance on those grounds, regardless.

While store managers may not be able to inquire about disabilities, if a case were to escalate to court, the person claiming discrimination would have to prove that they have grounds to sue. So, um, if the whole thing was faked, those grounds go out the window pretty quickly.

People who are already willing to put others’ lives at risk by refusing to wear a mask in public right now probably aren’t going to have much of a problem lying and claiming to have a disability to try to continue putting their own comfort over others’ lives.

And in that scenario, it’s going to fall to employees of businesses across the United States to be intimately familiar with the law rather than simply taking these fakers at their word. Are we ready to give these essential workers a raise yet?