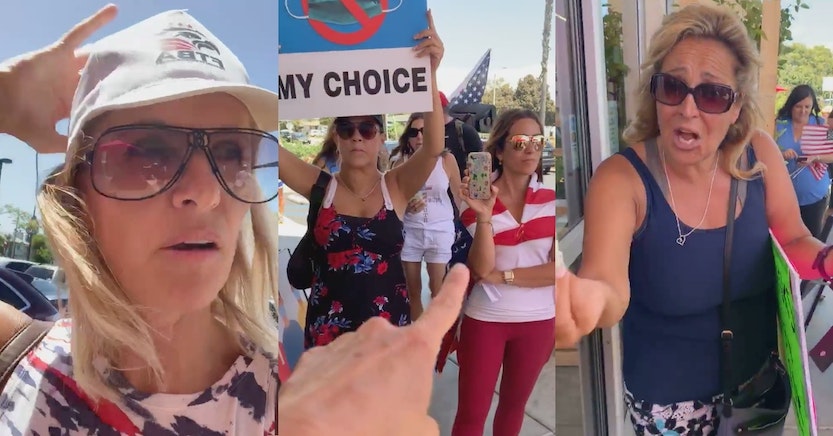 Despite anti-maskers throwing temper tantrums over the last few months, mask mandates continue in a number of cities and states across the country. And it seems the anti-masker behavior keeps getting more and more outrageous in response.

A group of these careless people somehow migrated from a protest against COVID-19 restrictions over to a Mother’s Market & Kitchen in Costa Mesa over the weekend, where they were denied entry, presumably at least in part for their refusal to wear masks.

The incident was streamed live on Facebook by Lenka Koloma, the attention-seeker who went around harassing people in grocery stores pretending to be from the fake “Freedom to Breathe Agency” earlier this month.

In the video, both maskless protestors and masked would-be customers wait outside after employees locked the door to prevent the mob or protestors from getting inside.

“They are keeping customers hostage inside of their store,” Koloma claims.

One hysterical woman up counts her money for the camera, insisting she has cards and cash and repeatedly crying throughout the stream that she needs to buy water and watermelon.

“This is a war crime,” Koloma exclaims, insisting that people are being denied access to food and water. “This is crimes against humanity happening right now at Mother’s Market and Kitchen in Costa Mesa.”

“There’s water right here,” someone offers. But of course, it’s not actually about the water.

Another protestor insists that what’s happening “is worse than communism.”

The full version of the video has the police ultimately showing up and heading into the store to arrest a protestor who managed to make her way in.

A subsequent video has them walking a maskless woman in a Trump 2020 skirt out of the store in handcuffs as the irate group waves around American flags, blasts the National Anthem, and berates the officers.

“This is an act of domestic terrorism!” Koloma cries.

Several people who happened to be at Mother’s Market at the time the outrageously entitled anti-mask group descended upon the store have come forward with their own accounts of what happened.

The Orange County Register reports that two women were actually arrested during the encounter on suspicion of trespassing. Their identities have not been released.