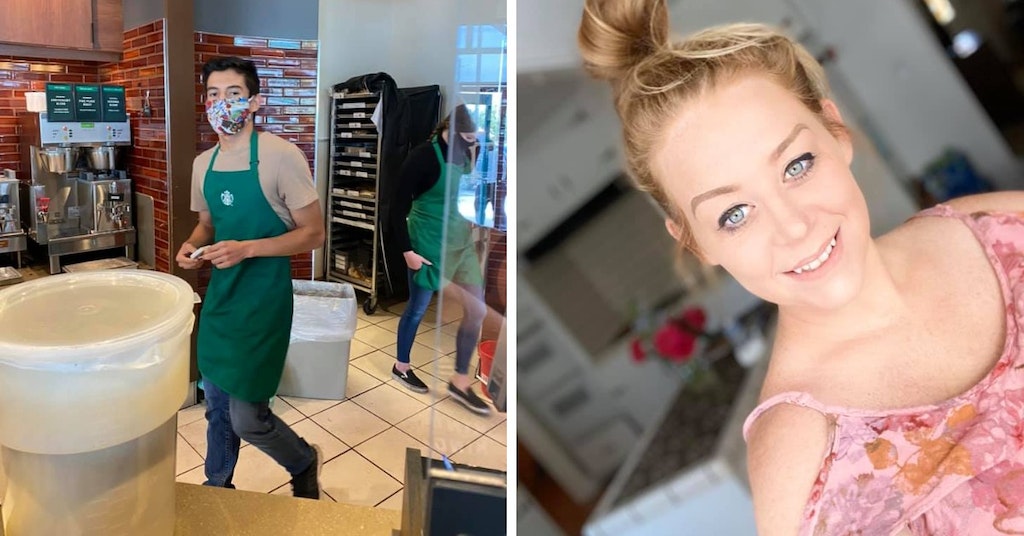 Anti-Mask “Karen” Wants Half Of The $100,000 That Was Donated To The Barista She Targeted

The anti-masker who managed to get a single barista over $100,000 in “tips” via a GoFundMe campaign that was started for him after she posted a photo of him on Facebook saying he refused her service now wants a piece of that action. She told the local news on Tuesday that she’s looking into hiring a lawyer to sue young Lenin Gutierrez for half of those GoFundMe earnings because she believes herself to be the victim of the story.

“I’ve been discriminated against,” she said. “I’m the one who’s sick.”

Woman posts pic of Starbucks barista who refused to serve her for not wearing a mask.

Woman wants to sue for half the tip because reasons. https://t.co/ms571JtckM

The anti-mask woman, Amber Gilles, posted the photo of Gutierrez accusing him of refusing her service in spite of her allegedly having valid medical excuses.

“Meet Lenen from Starbucks who refused to serve me cause I’m not wearing a mask,” she wrote. “Next time I will wait for cops and bring a medical exemption.”

The post was deleted after it caught a lot of negative attention, resulting in the creation of the GoFundMe page for Gutierrez, who was praised as a hero for standing up for the health of all customers, baristas, and the general mask-wearing public. Though the goal was initially only $100, the campaign was flooded with donations, ending at a little over $105,000.

Amber Lynn Gilles.
We were friend on FB until she started posting her fears for mandatory vaccines in CA & begged her follows for money so she could leave the state.

I told her to get a job. She blocked me.
AFTER she commented on a vid of me w guitar insulting me.
She’s trash!

As donations rolled in, Gutierrez posted a video explaining his side of the story. He says he never explicitly refused to serve her, but merely asked if she had a mask and was about to show her the official Starbucks guidelines on mask use when she reacted.

“She started calling people sheep and she left,” Gutierrez said. “Within a few minutes she came back and asked for my name, she took a photo of me and said ‘I’m calling corporate’ and started cussing some more at everyone and just left.”

Gutierrez was overwhelmed with gratitude for the donations and said that he would use it to pursue his dream of becoming a dancer and donate some to charity. That might be more difficult, however, if Gilles gets her way.

Funny how wearing a mask messes with her heartbeat, yet consuming caffeine doesn’t. Amber “pathetic” Lynne Gilles doesn’t deserve anything. Ur a privileged WASP. Starbucks is a PRIVATE business that can refuse service to people like Amber! 🤙😷 https://t.co/az9dyYmz3G

“It was discrimination and everybody is okay with it and enabling and rewarding that behavior,” she claimed to ABC 10 News San Diego. She also listed multiple health conditions she believes should exempt her from any and all mask rules.

“One of them I get shortness of breath, dizziness and it messes with the heartbeat. And I do have asthma as well, and I do get mask-acne. So there’s several things going on and not only that but it doesn’t even work.”

In addition to claims of breathing issues and acne, Gilles showed ABC 10 medical records from an ovarian cyst she had in 2015 — a common issue among those with ovaries — and a note from her chiropractor.

“Amber has underlying breath conditions that prevent her from wearing a mask or any type of facial covering whatsoever,” the note reads. “Please contact me if have any questions.”

The local news contacted the chiropractor with questions, but he refused to answer any.

Gilles is reportedly speaking with lawyers but due to the cost has said that she’s started her own GoFundMe campaign for legal fees, which no one can seem to find.