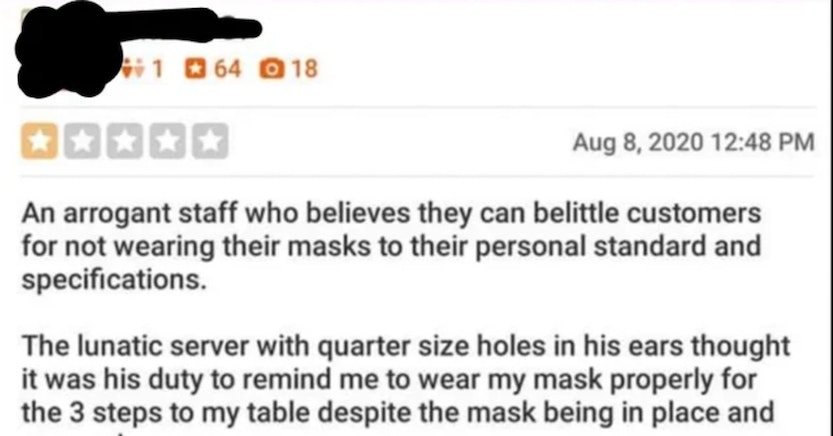 An anti-masker didn’t know who he was attacking when he left a one-star review for a restaurant after being told he can leave if he won’t wear a mask properly, as is required by the local health department. The review, and the response from the establishment, ended up on the Clever Comebacks forum on Reddit. The poster blocked out the name of the people and restaurant involved, which is too bad because the owner’s response could easily net him some new customers.

The unhappy customer tells one side of the story in his review, claiming that the “lunatic server with quarter size holes in his ears thought it was his duty to remind me to wear my mask properly for the 3 steps to my table despite the mask being in place and secured.”

He further claims that the staff “belittled” him for not wearing his mask “to their personal standard and specifications,” and says that he won’t be coming back because “ear hole boy” earned the restaurant a spot on his no-eat list. However, the owner of the restaurant had a different version of the story to tell.

“Sir, when I asked you to put on your mask, that you were holding up to your face (not properly, or secure), you threw a fit, and then wore it around your eyes and walked around to make a scene, then threw it down and said, ‘are ya happy now,'” the owner writes. “As I stated we don’t make the rules, the health department does, and I don’t need your disrespect.”

In a final twist, the owner reveals the identity of “ear hole boy.” Turns out that you can in fact have unusual piercings and own a restaurant at the same time.

If the anti-masker was hoping this review was going to get someone fired, he’s probably quite disappointed right now.

Unsurprisingly, because everybody loves a comeback on a whiny customer review, commenters are loving this.