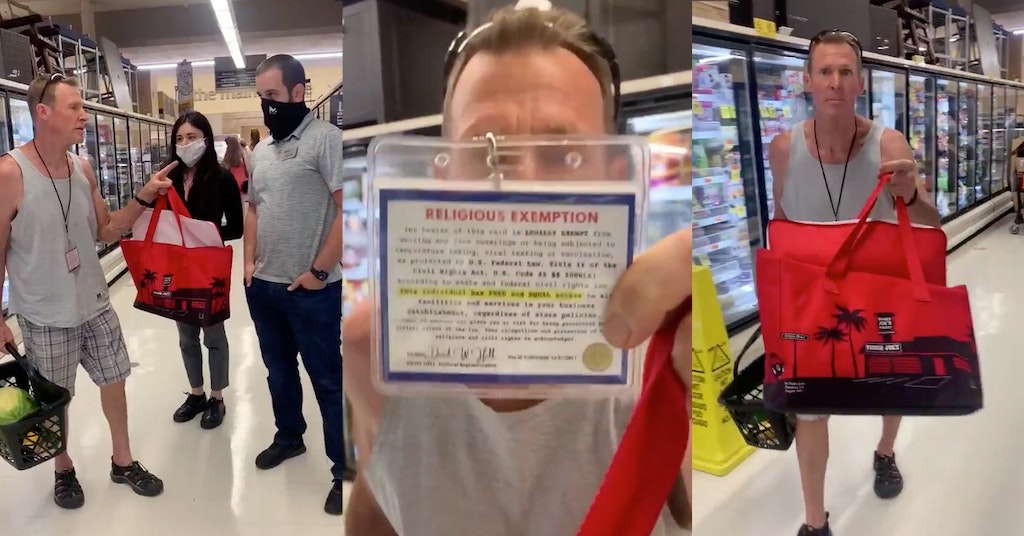 An anti-masker in California tried to claim “religious exemption” while shopping at a grocery store last weekend.

Two employees at Safeway in Santa Rosa approached the man, who had somehow gotten into the store without a mask and was mid-shopping, and tried to explain to him that the store has a mandatory mask policy in effect.

“You cannot refuse business,” the man falsely claimed, continuing to walk away from the employees. “Membership like Costco could, because they have membership. Safeway has no membership.”

At that point, the man realizes a nearby customer has started recording and goes up to him.

“Yeah, videotape it. Because it’s illegal to discriminate,” he says.

Enforcing a mask policy isn’t any more illegal than requiring customers to wear shoes into the store in order to be served. It’s a health concern. And anyone who does not want to wear a mask can generally be accommodated by stores in other ways, such as ordering online and having items brought outside to them.

But the man wasn’t done. He doubled back and presented a card he was wearing on a lanyard around his neck.

“One of those fake cards?” the person recording asks.

And it is indeed: the man held up a “Religious Exemption” card that says “the bearer of this card is LEGALLY EXEMPT from wearing any face coverings or being subjected to temperature taking, viral testing or vaccination, as protected by U.S. Federal Law, Title II of the Civil Rights Act, U.S. Code 42 §§ 2000(a).”

The Civil Rights Act protects people from being discriminated against for their religion, but not for fake claims that they are exempt from wearing a mask.

Folks online soon matched the fake medical exemption card to one that is available for purchase online for $12. “While we hope and pray this card will smooth your way, unfortunately we cannot state that it will guarantee your entry into any business establishment,” reads the description, as they are undoubtedly aware that there is no religious exemption for mask mandates under current law.

According to Newsweek, the man was ultimately allowed to check out with his groceries because he kept causing a scene, though store employees did call the police. The man was already gone by the time they arrived.