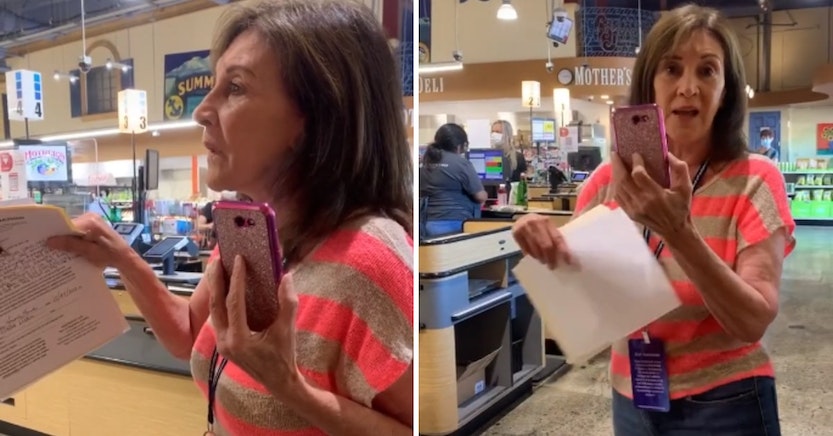 An Orange County woman was filmed attempting to “serve” a local grocery store, claiming to have documents from the Department of Justice to give the manager accusing them of violating the law by requiring customers to wear masks in their building. Video of the incident was posted on TikTok by Liz Chavez, who describes herself as an “essential worker dealing with Karens.”

The video begins with an employee firmly stating that the store is “a private business, and we’ve asked you to leave.”

“It’s against the law,” the anti-masker replies. “I’m going to leave, because I don’t want to buy anything.”

“So you’re not here to do business, that’s correct?” the employee asks.

The anti-masker claims she is there to “serve” the manager, who she calls Janet, with a document from the U.S. Department of Justice. The employees refuse to entertain this, however, and inform her that she’s trespassing. The woman continues to insist that she needs to speak with “Janet” before the video ends.

The DOJ has issued public warnings about individuals claiming flyers or documents are official forms from their department that use the old, debunked line about the Americans with Disabilities Act (ADA) making mask requirements illegal. These documents may even seem to have the DOJ seal on them, but they are not issued by the government.

“Inaccurate flyers or other postings have been circulating on the web and via social media channels regarding the use of face masks and the Americans with Disabilities Act (ADA) due to the COVID-19 pandemic,” the DOJ warned back in June. “Many of these notices included use of the Department of Justice seal and ADA phone number.”

“As the Department has stated in a previous alert, the Department did not issue and does not endorse them in any way. The public should not rely on the information contained in these postings.”

It’s unclear if the woman ever got her message to Janet, though a follow-up video shows her in her car telling the employees that her name can be found on the documents she gave them. She also appears to threaten them specifically with legal action and continues to claim that requiring masks is “against the law.”

TikTok commenters have widely praised the store employees for standing up to this woman, with some accusing the anti-masker of breaking the law.