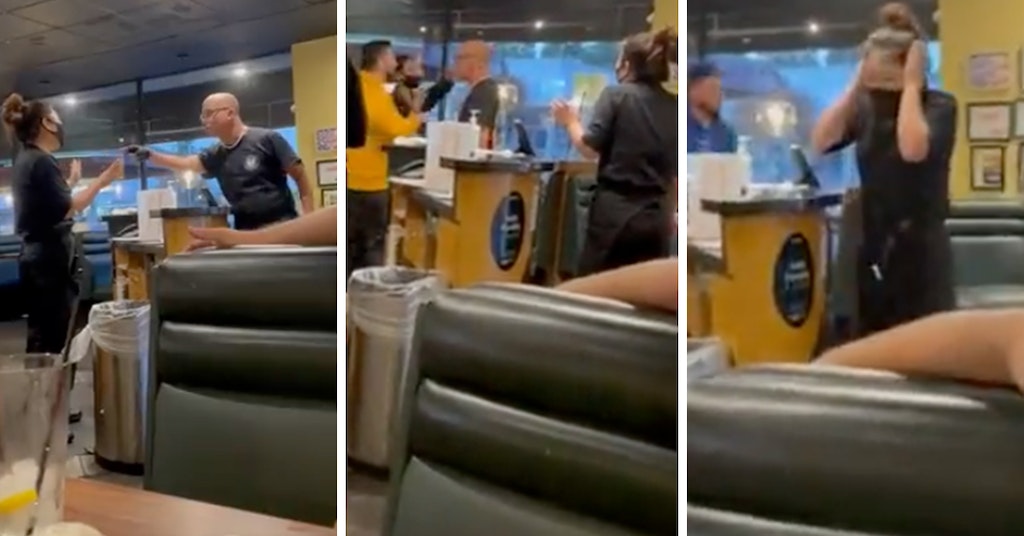 Anti-Masker Gets A Fist To The Face After Threatening Hostess, Shoving Customer

An altercation between an anti-masker and customers got physical — and ended with the former getting punched in the face.

Video taken by another customer inside the restaurant shows the man arguing with the hostess, who it seems refused to seat him because he wasn’t wearing a mask.

He accused her of discrimination and tossed out a casual threat — “We’re going to f—k your restaurant up” — even as she seemed to try to explain that they were operating under a mandate.

Customers were speaking up and telling him to leave, which he briefly did before storming right back in. Only this time, another customer immediately grabbed his attention.

“You go f—k — you wanna do something?” the anti-masker demanded.

“No, I don’t want to do anything,” the other customer replied, trying to keep his distance from the maskless man angrily up in his face. The anti-masker realized this and started advancing on the man, ultimately shoving him with both hands.

Two other customers immediately got in between them as someone yelled that it was time to call 911, but everything was interrupted by a man in a blue hoodie swarming up from behind the group and throwing a punch right at the anti-masker’s face.

He was sent flying to the ground but soon got back up, seemingly unharmed, as the restaurant erupted in shock.

“That’s assault!” he screamed from the doorway

“Yeah, that’s your fault,” someone else replied.

While violence isn’t usually a good answer to anything, a lot of people on Twitter still found it satisfying to see someone actually stand up to one of these anti-maskers, who don’t have any problem putting other people in harm’s way and, as seen in this case, getting physical when they don’t get their way.

Yes, he sure found out.