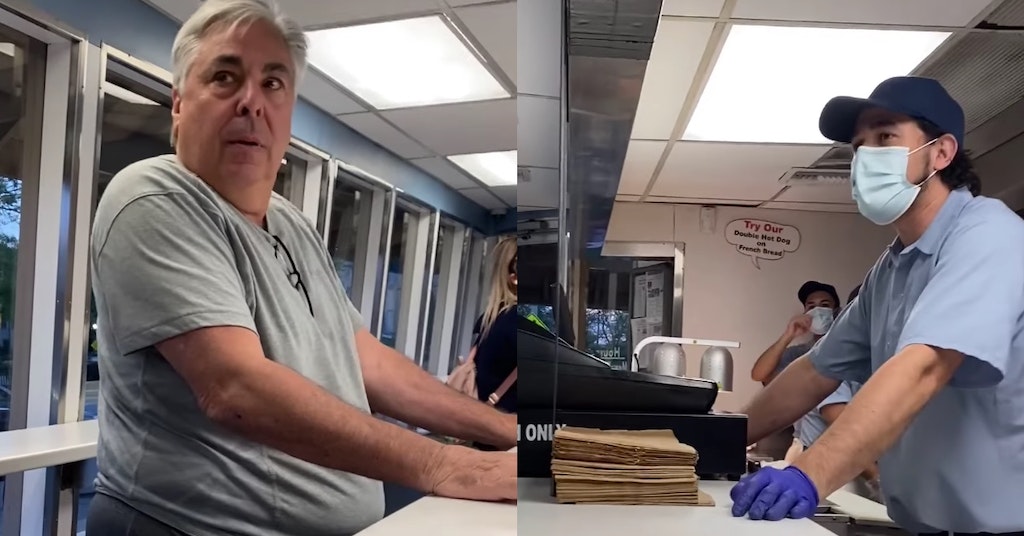 An anti-masker who felt entitled to getting served whatever he wanted on his own terms got a surprise when restaurant workers stood their ground against his bullying.

Sergio Correa shared footage he captured while waiting in line at Johnnie’s Beef in Chicago, Illinois, earlier this month. According to Correa, a man came in and refused to put on a mask, and even went so far as to rip up a sign posted that informed customers masks are still required.

The video opens up with the man already mistreating the employees, shrugging and telling them, “F—k you, serve me” in a brazen display of entitlement.

When they decline, he devolves into a racist tirade.

One employee just tells him “bye” as he keeps shouting on his way out the door, but the man eventually returns, still hurling insults and seemingly trying to goad the employee into a fight.

“Come on, you little c*nt,” he says, before claiming he’s going to plant himself at the counter and make their lives miserable all night until they serve him or call the police.

The workers refuse to give in to his demands but also decline to call the police as he keeps saying they’ll have to do.

Until, in a bizarre twist, the man pulls out his phone and claims he’s calling the police himself “because you aren’t serving me” and leaves the store.

“I could not believe the way this man was acting. All because he refused to put his mask on and place his order,” Correa wrote on Facebook. “America is so divided because of racist and ignorant people like this, with so much hatred in their hearts. I’m so sorry to the employees that had to take this kind of treatment for just doing their job.”

People watching the video online were just as frustrated, especially after a year of watching anti-maskers act so entitled and too often devolve into some sort of bigotry or violence after not getting their way.

It isn’t immediately clear whether the man actually tried calling the police on a hot dog stand for not serving him after he refused to follow their rules and harassed the staff, but it seems a lot more likely he just used the phone call as a sad excuse to see himself out when he realized his threats weren’t actually going to get him what he wanted.

And to think, this all could have been avoided had he just worn a stupid mask.