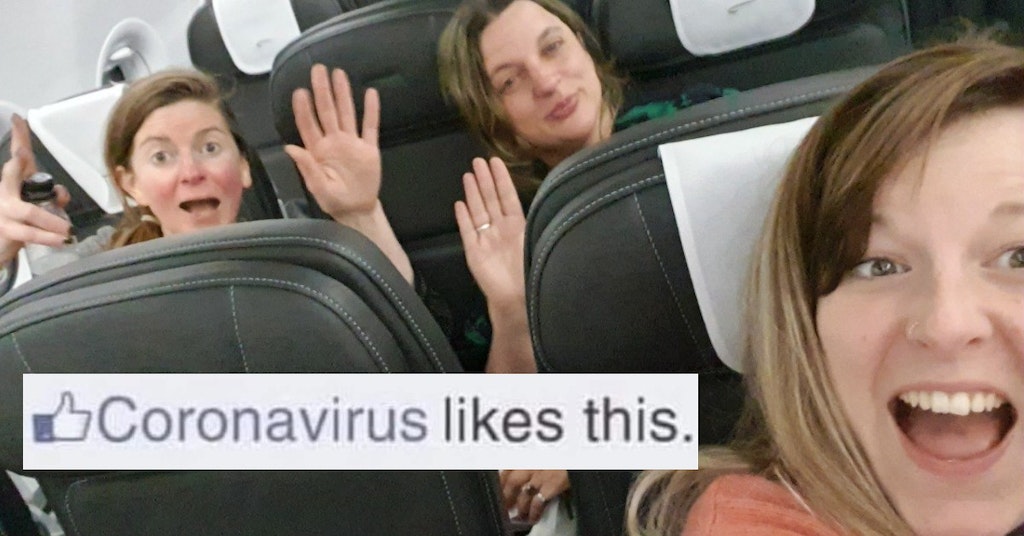 
A group of British anti-maskers is aggravating folks on Twitter after one of them posted photos bragging about how “police and authorities could not make us wear masks” on a flight back home. They were coming back from a trip to Germany, where COVID-19 cases are on the rise as local political leaders refuse to accept Chancellor Angela Merkel’s new measures to slow its spread.

According to Twitter user "Char," she and nine of her friends had a "stand off" with German authorities, calling it their "last protest on German soil."

She also had the nerve to call the airport security or whoever they irritated into letting them on that plane "Nazi police," which is guaranteed not to sit well with modern-day Germans.

Char claimed that she and all of her friends somehow had "medical exemptions" allowing them to travel without wearing masks, which seems highly unlikely considering the number of anti-maskers who tout using fake exemptions to get around the law. There is also no doubt that Char is politically opposed to mask-wearing, judging by her other tweets.

In one post bragging about refusing to deal with British tabloid The Sun because they supported lockdowns or something, she literally said "I don't dance with the devil in the pale moonlight."

In follow-up tweets responding to the backlash against her bragging about possibly exposing all those other flight passengers to a deadly virus, she also expressed a number of common anti-masker misconceptions about the very topic they're so passionate about.

"We had medical exemptions. But passengers can take theirs off to eat and drink?" she said. "So the virus is not that deadly on a plane is it really? It's about being compliant."

Wearing a mask as much as possible is, of course, meant to minimize the spread of the virus, which loves to travel via spit particles released when people cough, sneeze, and talk. Evidence suggests that the severity of COVID-19 depends on viral load, which means that minimal exposure thanks to widespread mask usage could save lives.

Unsurprisingly, a lot of people are not happy with this "Char" individual right now.