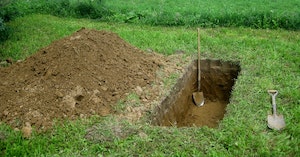 Local news in Indonesia is reporting that eight men caught leaving their homes without masks have been ordered to dig graves for COVID-19 victims as punishment as case numbers rise in the province of East Java. The head of the district, Haryono Suyono, said the help was needed anyway and that he hopes this will teach people not to ignore the law.

“There are only three available gravediggers at the moment, so I thought I might as well put these people to work with them,” he said according to The Jakarta Post.

The men will be assigned in teams of two to a grave, with one digging and the other adding wooden planks to the hole to help support the body. They will not be allowed to attend the burial ceremonies after they’re done.

“Hopefully this can create a deterrent effect against violations,” said Suyono.

Areas of Indonesia have been cracking down on mask mandate violators as outbreaks appear in villages across the country. New laws passed during the pandemic say that the punishment can be fines or community service.

Digging graves doesn’t seem so bad compared to other punishments handed out to those who have ignored pandemic mandates. According to Newsweek, Sragen regent Kusdinar Untung Yuni Sukowati ordered those who were breaking quarantine policy to be locked up in abandoned houses, which are widely considered by the locals to be haunted.

Though it’s unclear whether our own laws would allow for such a thing, the prevailing opinion among U.S. pro-maskers is that the grave-digging punishment should definitely come on over here.