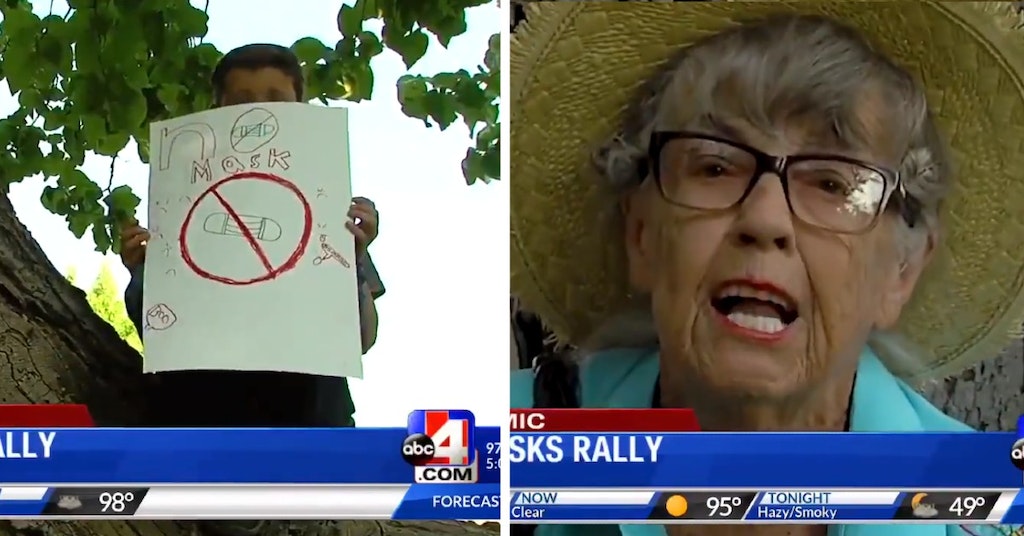 Video from an August anti-mask protest in Utah is going viral for the sheer audacity of the claims made by anti-maskers into press cameras, including a woman who compared having to wear a mask to the police killing of George Floyd.

It’s unclear whether she ever finished her thought on what happened after George Floyd, including the many right-wing supposed freedom lovers who blamed him for his own death by repeating the unproven claim that he was trying to use a fake $20 bill.

Perhaps the only thing more offensive than a white woman mildly inconvenienced comparing herself to a Black man who was killed by a cop is the one who made an outrageous claim about the kinds of people who enjoy wearing them:

“I’ll tell you another reason I hate masks,” she says. “Most child molesters love ’em.”

There is, of course, zero evidence to back this up. Same with the statement made by the little boy who was clearly just repeating what his parents had told him to say.

“The flu kills more than coronavirus,” he falsely said, stumbling over the word “kills.”

The Utah protest was outside of a local school in spite of the fact that state schools must require students to wear masks by order of the governor and don’t actually have any power to change this mandate.

Anti-mask mandate protests have not been an uncommon sight across the U.S. in recent months, but some of the statements made at this one, in particular, seem to represent an escalation within a “movement” that is already pretty extreme. Mask/health fans are alarmed, to say the least.