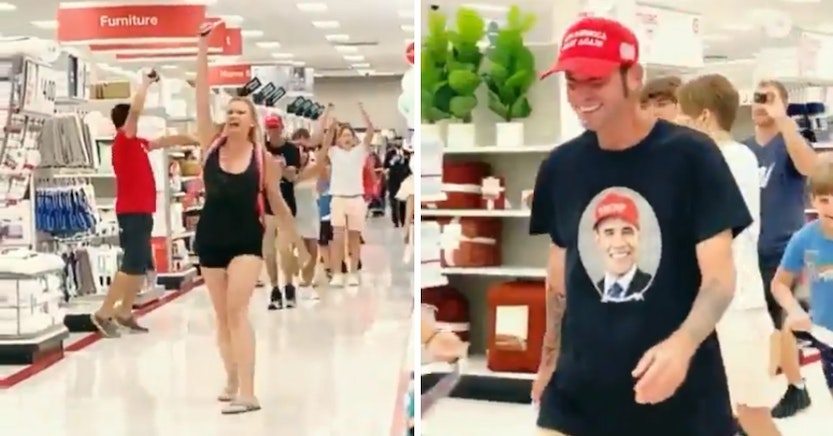 Video of a group of anti-maskers loudly parading through a Target store yelling at customers to take off their masks is going viral as people alternate between laughing at them and despairing for the fate of humanity. The group is made up of young people, with at least one small child in the mix.

The U.S. passed the 200,000 deaths mark from the coronavirus pandemic on Tuesday.

The anti-maskers can be heard shouting “take it off” and “we’re not gonna take it anymore” as the individual taking the video calls them “f***ing idiots.”

Their “protest” appears to work on some as the group cheers a couple times after appearing to point at individual customers while shouting “take your mask off,” though at least two people including the video-taker clearly refuse.

One of the group sports a “Make America Great Again” hat with a shirt featuring an image of a smiling Barack Obama who looks to also be wearing the MAGA hat.

According to HuffPost, one of the participants in this protest was Cristina Gomez, who livestreamed the incident as well as the rally leading up to it, which mostly consisted of people yelling about not wanting to have to wear masks because they don’t like it. They also appear to continue to misunderstand how viruses work.

“How is it that if their mask is working, that I have to wear one, too?” asks a man in a MAGA shirt while standing in the back of a pickup truck.

“So today has been proclaimed as September 15: The day where we say goodbye to wearing masks in stores.”

The whole “peaceful demonstration” lasted only a couple minutes before they exited the store before they went back out into the parking lot to celebrate the fact that they convinced some people to take their masks off.

Others are not so thrilled at the sight of these videos, with some mocking the protesters for what they see as a misguided effort, at best.