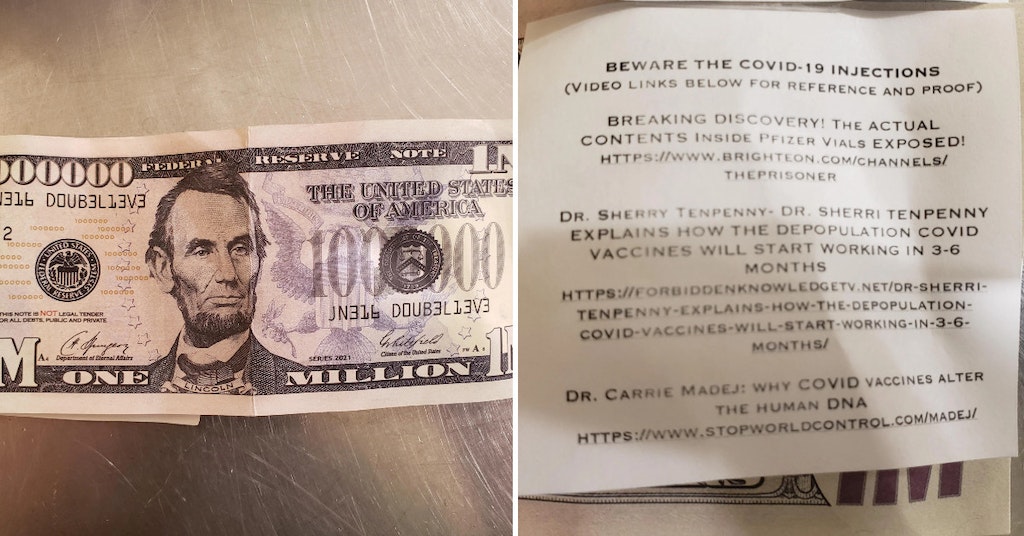 A user on the Reddit forum “Religious Fruitcake,” which “focuses on people who take religion to dumb, absurd, terrible & crazy extremes,” shared some rather extreme Christian and anti-vaxxer propaganda left behind by a customer in the form of that annoying fake money trick.

The worker found a paper “$1 million bill” in the style of a fiver with a weird pro-Jesus metaphor on the back and wrapped around two more pieces of garbage, one warning about the end times and the other sporting links to anti-vaxxer nonsense videos claiming that the COVID-19 vaccine alters human DNA, among other falsehoods.

The fake money note compares the story of Jesus Christ absolving humanity of its sins to a random person paying a $1 million fine in order to release you from life in prison, which is not how life sentences work. People who commit felonies often face jail time in addition to a hefty fine, but you can’t just pay your way out of a long prison sentence because then laws wouldn’t actually apply to rich people.

These fake banknotes are not uncommon sights for those who work tipped positions. Wait staff and others who largely rely on tips to survive because their bosses won’t pay living wages have learned to expect and resoundingly hate these notes, irritated by having their hopes risen by the sight of money only to find a useless piece of paper going on about religious stuff nobody asked about. This customer, however, took the next step with their additional notes.

The first one predicts the second coming of Jesus, a tale very popular among Evangelical Christians who have expected for centuries that any day now, Christ is going to reappear, take all the good and right Christians to heaven, and leave the rest of us to eternal damnation.

“Jesus is coming VERY soon. Will you be ready??” the note asks ominously. “Many, many believers globally are having dreams and visions of his soon return. Jesus is the way for what’s coming (rapture of the church), and the only way to heaven (John 14:6).”

It then recites the usual instructions for how to convert to Christianity, which exactly zero people have done after reading about it on a little piece of paper that came with some fake money.

The second additional note veers way off the original topic straight into anti-vaxxer city, warning people to “beware the COVID-19 injections” and listing URLs to videos made by anti-vaxxer celebrities Dr. Sherry Tenpenny and Dr. Carrie Madej on websites with names like STOPWORLDCONTROL.COM.

For the sake of humanity, we did check out the link to the “depopulation” video and can confirm that it was posted in February, a couple of months past the six-month point. But Tenpenny has probably already revised her end times date to somewhere in the future, just like that QAnon guy and his prediction about JFK Jr. returning from the dead to crown Donald Trump as the “king of kings.”

“Dr. Tenpenny and other scientists predict that millions may die from the vaccine but it will be blamed on a new strain of COVID – to make an argument for even MORE deadly vaccines,” the web page reads.

Unsurprisingly, the users of “Religious Fruitcake” were unimpressed by the claims made in these notes and are wondering how this is supposed to convince any normal person of anything.