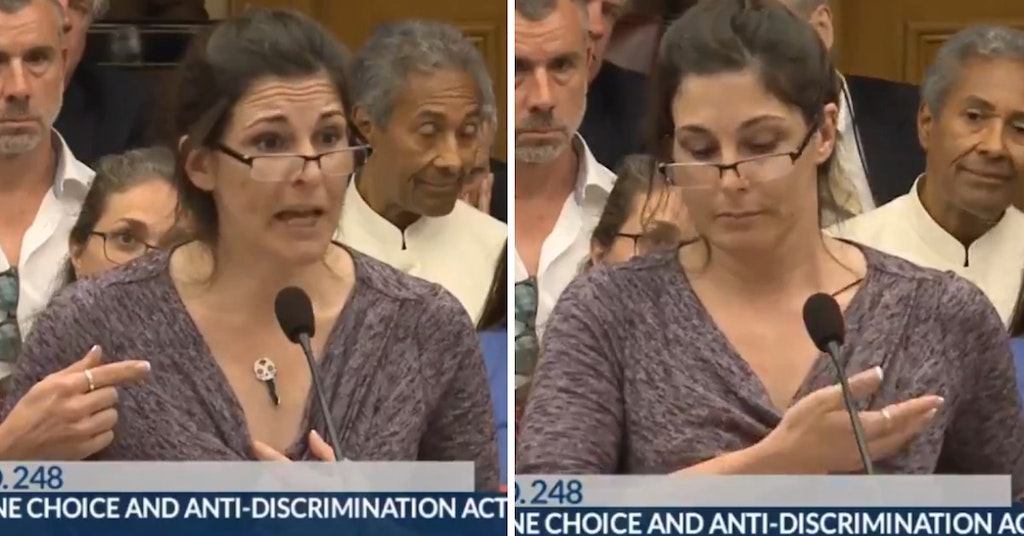 Normal people online are collectively cracking up at a video of another anti-vaxxer trying to prove the false conspiracy theory that the COVID-19 vaccine makes people magnetic in public testimony before the Ohio House health committee and embarrassing herself instead. Local nurse (for now) Joanna Overholt used a brass key and a bobby pin, placing both against her skin to show how they stick to her.

The only problem was that they didn’t really stick at all.

“Yes, vaccines do harm people. By the way, so I just found out something on while I was on lunch and I wanted to show it to you. We were talking about Dr. Tenpenny’s testimony about magnetic vaccine crystals, so this is what I found out, so I have a key and a bobby pin here.”

Overholt presses the key against her chest and shows how it stays there, perhaps in part due to the fact that her chest slopes outward just below in the style of typical human breasts.

“Explain to me why the key sticks to me,” she says before trying the same thing on the side of her neck. Unfortunately for her, it doesn’t stick, no matter how hard she tries, even as she says “it sticks to my neck, too.”

After the key fails to stick, she tries it with the much lighter bobby pin, but even that only stays for barely a second after the third try before falling.

“Yeah, so, if somebody can explain this, that would be great,” she concludes.

Well, Joanna, the best explanation can probably be found in the poor quality of education common throughout the U.S. As for things kinda sorta sticking to human skin, that is due to the body producing a substance called sebum which is slightly sticky regardless of vaccine status. This is something many bored children discover with all kinds of lightweight objects, metal or otherwise.

Speaking of metal, standard house keys such as the one used by Overholt are made of brass or aluminum, which are non-magnetic metals. Oops.

The previous testimony Overholt was referring to was that of Dr. Sherri Tenpenny, a well-known anti-vaxx activist who has jumped on the magnetism conspiracy theory and linked the entire thing to the 5G conspiracy theory as well, because crazy loves company. She also tried to use non-magnetic keys in her argument, as well as objects like spoons that kids have been sticking to their noses in boredom for decades if not centuries.

In spite of simple scientific explanations and people noting that even if there was any trace of metal in a vaccine, the tiny amount of liquid that it injected in a single shot or even two shots would never be enough to “magnetize” an entire human body, the conspiracy theory has continued to spread on TikTok and anti-vaxxer forums.

Some have at least heard the explanation about human skin being sticky, with one man attempting to “disprove” this by using baby powder to make it un-sticky to show how metal still sticks to him. Unfortunately for him, it doesn’t.

But at least he can admit to being an idiot at the end.

Elsewhere, meanwhile, regular people are attempting to restore public sanity by making their own videos showing how objects stick to the skin of unvaccinated kids or just mocking people for their lack of anything resembling scientific knowledge.