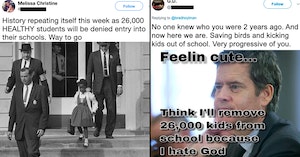 Anti-vaxxer parents in NYC got a harsh dose of reality injected right into them when their kids were banned from public schools this summer. The mandate was enacted in June, and parents had fourteen school days to get their kids vaccinated before they were ejected. Many parents refused to concede, and Buzzfeed News reports that there have been protests at the governor’s office.

Until now, people have been able to send their children to public school without being vaccinated if they held “genuine and sincere religious beliefs” against immunizations. The number of people claiming that god told them not to protect their kids from whooping cough increased to such a degree that New York experienced the worst measles outbreak it has in decades.

There is an enormous amount of misinformation being traded in insular communities, especially those organized around religion, and many people mistakenly believe that vaccines cause autism.

Let’s just say it one more time for the people in the back: VACCINES DO NOT CAUSE AUTISM.

And it’s pretty ableist to be more afraid of your kid being autistic than that they’ll die of polio.

“Immunizations give children the best protection from serious childhood diseases and the science is crystal clear that vaccines are safe and effective,” the New York Health Department told BuzzFeed News.

But do these folks care about science? No. They do care that now they’ll have to teach their kids at home, and they’re posting all sorts of sappy tweets about how their poor unvaccinated children now have to learn at home:

This is my daughter. Tomorrow ahould be her first day of kindergarten. Instead today was our first day homeschooling. You voted to have her removed from school because of our religious beliefs. How dare you speak of “social justice” when you segregate. #WhatsThePlan #TeachMeNY pic.twitter.com/gXZdrwJ6Nr

New York kids just write the darndest things! @NYGovCuomo See? They are OUR kids, certainly not yours. Believe in the love and wisdom of parents. #VaxWoke #FamilyPride #TeamParentsNY pic.twitter.com/Ghiar1Ek7v

This is what you’ve done to our children. NOW WHAT?!! @DickGottfried you POS. @CarlHeastie YOU THUG. @NYGovCuomo you COWARD. YOU SOLD OUR CHILDREN. SHAME ON YOU #Whatstheplan #newyorkstate #communistcuomo pic.twitter.com/Wrji9b4zug

But as people have been pointing out, all these parents actually need to do is get their children vaccinated and they’d be welcome back at school:

She's not being segregated, she's suffering the consequences of her parents' poor decisions. #whatstheplan? Make an appt w/her ped & start getting her UTD on her vaccines. Then she can go #backtoschool. #TeachmeNY #VaccinesWork #teamparentsny https://t.co/nffpEsG30D

After signing the bill in June, Gov. Andrew Cuomo told reporters, “I understand freedom of religion. We all do. We respect it. I’ve heard the anti-vaxxers’ theory, but I believe both are overwhelmed by the public health risk.”

There are kids in that school who actually cannot be immunized or who are at higher risk of getting sick. They need to be protected too, and have parents at home who did the responsible thing. God wants you to take care of your health, folks, and your kid’s health, too.