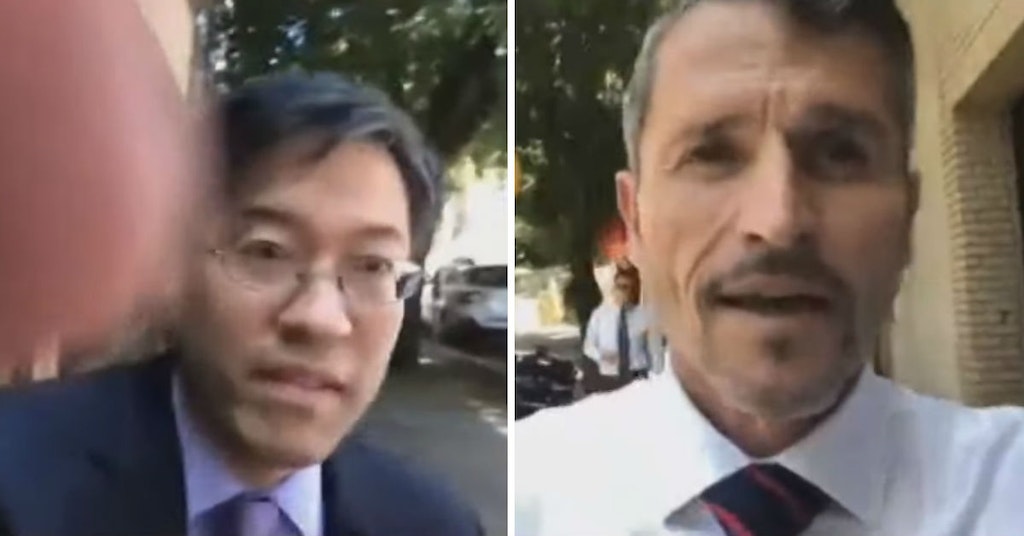 Anti-Vaxxer Films Himself Shoving California Senator, Gets Charged With Assault

An anti-vaxxer took his harassment of pro-vaccine politicians to a new level when he shoved California state Senator Richard Pan from behind while on Facebook Live with his own phone, then saying “yeah, I pushed you.”

Conspiracy theorist Kenneth Austin Bennett was reportedly walking through the streets of Sacramento railing against chemtrails and the CIA when he happened upon the Senator, whom he recognized as the leader of a push to reduce immunization exemptions.

Senator Pan was simply trying to go to lunch when Bennett started following him, demanding answers to the usual anti-vaxx talking points. According to the Washington Post, Pan politely dismissed him and suggested he “study public health.” Bennett then suddenly and randomly pushed him from behind, causing Pan to stumble forward.

The police were called, and the anti-vaxxer was arrested, cited with misdemeanor battery, and released. The video remained up on Facebook Live for some time, but appears to have finally been removed.

Although Pan was not injured, he is concerned that this physical attack was the result of increasingly violent rhetoric from the anti-vaxxer crowd that could further escalate beyond a relatively harmless push.

“I get harassed on social media, practically daily,” Pan said to local new station KQED. “We’ve got to tone down the rhetoric. Assaulting a public official is the next logical outcome of violence-inciting language.”

In a statement put out Thursday, Pan called on Facebook to remove the video from the social platform, expressing concern that it could incite “a future assailant who seeks to up the ante with a weapon.” The Senator has already received multiple death threats from people taking issue with his desire to vaccinate children.

“An honest, civil debate grounded in science and facts of the merits of legislation is always welcome. Threats, lies and violence will be rejected.” @DrPanMD

Later in the video, Bennett says that Pan deserves to be “hanged for treason for assaulting children, for misrepresenting the truth.” After being released from police custody, he made several hours worth of Facebook Live videos refusing to apologize and accusing Pan of being part of a child-poisoning “cabal,” and somehow claiming to not be a part of the anti-vaccine “community.”

Pan’s work to remove religious and personal belief exemptions from California vaccine law have increased the number of children becoming vaccinated in the state. Next he is tackling the increase in medical exemptions that health experts worry could be a way of getting around the new laws.