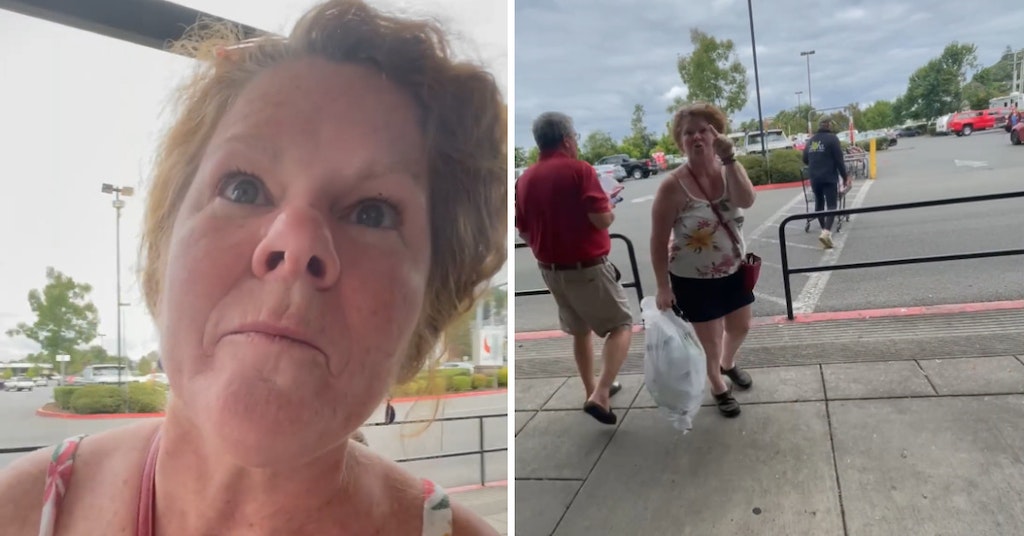 A young woman was left in tears after being attacked by an anti-vaccine lady who became incensed when she started filming her husband after he called her a “c–t” because of a bumper sticker on her car reading “Abolish ICE.”

Alyssa Cuellar posted the video on Facebook Sunday, warning those in the area of Ilwaco, Washington that the couple remained at large and that the woman who attacked her works with disabled children. A recent update to the post says that the anti-vaxxer fired one of her employees for getting the COVID-19 vaccine.

Though Cuellar was clearly filming the man who cussed her out from afar, stating that she was only making sure he didn’t try to damage her car, the older woman, identified as Moe Darling, accused her of harassing him and repeatedly told her to “get away from him.”

Cuellar was presumably able to find identifying information about this couple after catching the license plate number on their pickup truck at the end of the video. Darling starts out sounding almost reassuring, but soon calls Cuellar the c-word herself and quickly becomes aggressive.

“I literally got out of my car and he yelled ‘f— you’ because of a sticker that I choose to have on my car.”

Darling continued to cuss Cuellar out in front of her young child, with Cuellar sarcastically pointing out that it was a “great example” for her. The older woman then pulls the classic aggressor move of getting right up in Cuellar’s face to demand that she “get back.” When the younger woman refuses to back down, Darling tries to provoke her further by repeatedly calling her a “b—h.”

“What is your goal here?” Cuellar asks. “What are you doing?”

“Getting you away from my husband right now,” says Darling as her husband is across the parking lot, nowhere near Cuellar.

Darling continues to demand that Cuellar go into the store, at one point bizarrely yelling “it’s America, b—h,” repeatedly and still getting up in the young woman’s face. Finally, the husband comes to collect his wife and it seems like the family, with a terrified child in tow, is leaving. Cuellar, clearly shaken up, tells concerned bystanders that Darling and her husband, Vince McLeod, were harassing her. At this, Darling turns around, falsely claims that Cuellar started it, then slaps the phone out of Cuellar’s hand.

A scuffle ensues as Cuellar tries to collect her things and the camera goes wild while the young woman shouts at Darling to get away from her. She describes what occurred during this period in the text of the post.

“What started with me filming for my own safety, led to me being sore & beat up, along with her damaging my phone, along with physically attacking me and breaking my keys, along with my wallet and an attempt at breaking my glasses,” Cueller wrote. “She ended up physically pulling me down to the cement after I finally regained my things she had previously scattered and broke, and proceeded to scratching my chest, my back, my glasses on the cement, my knee which is also now swollen and bruised.”

Cuellar can be heard openly crying after the attack, saying that she just wants to go back to her car. According to her, Darling ended their interaction with a threat.

“She then told me it was because of my choice in supporting BLM and ‘the liberals’, that this happened to me & I should take it as a lesson.”

She further expressed that she was just glad they didn’t have weapons and that she wasn’t a person of color “or someone more vulnerable” because they might have been even more violent otherwise. According to the International Business Times, Cuellar says the attack left her with a concussion.

“It’s much deeper than a lot seem to portray it,” she said. “As I was attacked over a racially motivated hate crime due to my sticker they didn’t like. It says abolish ice which is something I feel strongly for. That’s what started it all and why I was attacked.”

According to commenter Darla Song on Facebook, this isn’t the first time the couple has been aggressive, rude, and belligerent to a stranger.

ICE, short for Immigration and Customs Enforcement, is a law enforcement agency formed in 2002 that came under heavy criticism during the Trump years for their policy of taking children from their mothers’ arms under a cruel separation policy that resulted in child prisons on U.S. soil. While the call to abolish the young agency has appeared to quiet down or at least not get as much press, they have continued to imprison migrants, including thousands of children, and the child separation policy has continued under Joe Biden.