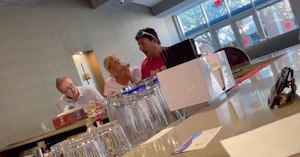 One emotional man took the opportunity to all but shout it to the rooftops when he went out for a drink and wound up going on a rant against vaccines that another customer recorded and shared to TikTok.

A woman with him is already in the middle of trying to get the man to calm down as others at the bar remain silent. Instead, he gets increasingly agitated, insisting that the vaccine is “disgusting” and that it’s “f—king a very sore subject for me.”

“No one’s talking to you, so shut up,” she tells him as he keeps going.

He doesn’t, arguing with her for a while then going back to his anti-vaccine crusade, claiming: “It’s bullsh—t and everybody knows it. It’s maiming and killing people… I’d rather do heroin than I’d rather put a vaccine in my arm.”

At some point, another man nearby gets involved in the conversation, apologizing for saying something about vaccines prior to the start of the recording. The woman points out that all he said was they had to wear masks if they went to Cabo, which the loud anti-vaxxer immediately dismisses as an option.

“No. I will not be wearing a mask anywhere. Nor will I be getting tested,” he says. “It just gets my blood boiling. The sadness.”

While this guy wasn’t directly harassing other customers or employees of the bar as happens too often in these sort of videos, his insistence on disrupting everyone’s day to be so aggressively dismissive of the world’s attempts to get out of the pandemic still annoyed viewers.

“What a douche!” wrote one TikTok user. “I’m afraid if I was sitting at the bar I would be laughing hysterically.”

“He’ll be quiet when he’s intubated,” suggested another.

And the assumption in one viewer’s comment that “MAGA Men are so emotional” feels on point, even though we don’t technically know this man’s political leanings. After all, belligerent anti-vaxxers do tend to fall to one side of that spectrum.