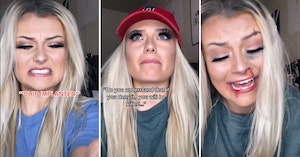 A fashion company owner and anti-vaxxer by the name of Taylor Rousseau recently published a TikTok dramatization of what she seems to think will happen in the near future when vaccines are not only mandatory, but refusal to take one results in the death penalty. Also, vaccines have microchips in them or something.

The video seems to depict two different characters, judging by the change in outfits. The first agrees to take the vaccine and gets a “chip implanted.” The second refuses and is depicted with increasing injuries as she’s apparently beaten to death for her crimes, but in the end gets props from God for being a good anti-vaxxer.

The whole thing is set to “Train Wreck” by Christian singer-songwriter James Arthur. Close to the end, as the anti-vaccine character is bruised and bloodied, she starts lip-syncing to the bridge, mouthing “I’m down on my knees and I need you to be my God.”

At the very end, the anti-vaxxer is depicted as being in heaven, with God saying “Well Done, Good and Faithful Servant” as she smiles in wonder.

The idea that anti-vaxxers will be persecuted and even killed for their beliefs, as well as the belief that vaccines are just a cover for implanting microchips into everybody, is not uncommon among the wildest anti-vaccine groups. This, however, may be the world’s most dramatic depiction of their feared dystopian future yet to come into existence.

Rousseau even visibly cries as she’s told by the imaginary vaccine enforcer “do you understand that if you deny it, you will be killed…” and while she’s pretending to be beaten up. The makeup job isn’t bad, but the blood should be a little darker.

The video was originally posted in early October, but people outside of the anti-vaxx communities are just starting to notice it, and they have some additional notes.