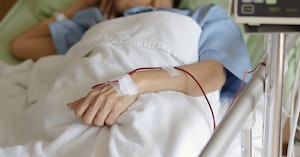 Doctors across the U.S. are now dealing with the latest exhausting anti-vaxxer trend making their jobs even harder—people demanding that their life-saving blood transfusions come only from unvaccinated donors. This is an especially tall order when 60 percent of the adult population is fully vaccinated, and experts say that around 90 percent of the blood donations they receive contain COVID-19 antibodies either from the vaccine or from a previous infection.

“A lot of people think there’s some kind of microchip or they’re going to be cloned,” said Dr. Geeta Paranjape in Texas on local anti-vaxxers.

Not only is there not a lot of blood that could be proven to be from someone unvaccinated against COVID-19, since there is no evidence whatsoever that components of the vaccine linger in the blood, let alone microchips, but blood donation centers are also not exactly labeling their blood bags for this. Doctors would have to individually test blood bags for antibodies, which is the only way to determine if the donor might have been vaccinated.

“While the antibodies that are produced by the stimulated immune system in response to vaccination are found throughout the bloodstream, the actual vaccine components are not,” Red Cross Director of Biomedical Communications Jessa Merrill confirmed for Kaiser Health News.

With hospitals already overcrowded with COVID cases in many areas and healthcare workers pushed to the brink of collapse, none of them want to have to test ten blood bags just to find one without antibodies, maybe, for the sake of someone refusing to believe in medical science.

Doctors have instead opted to be firm with these patients, letting them know that they can either take the blood offered or go without. In one case, Dr. Claudia Cohn had to do this with a woman who was going to need a cesarean section for a high-risk pregnancy.

“I said, ‘Listen, the alternative is you don’t get the blood and that’s what will affect you,'” said Cohn.

This has become a significant headache for doctors across the nation, where one in five people believe at least one form of vaccine misinformation spread by anti-vaxxers, such as the thing about it altering DNA or causing infertility, according to a Harvard study. This is the last thing they need on top of everything else, and people outside of the medical community are not happy to hear about it, either.