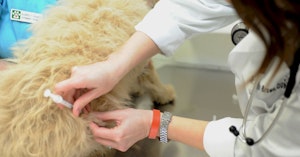 Tired of just denying their children life-saving vaccinations, anti-vaxxers are now wondering if they should be vaccinating their pets. Yes, they are asking if their dogs can get autism.

Apparently, an increasing number of pet owners in places such as “hipster areas of New York” (writes the Telegraph) are expressing concern to their vets about the “side effects” of routine vaccines for their dogs, cats, and other animals, including a fear of some kind of never-before-seen dog autism.

“I had a client concerned about an autistic child who didn’t want to vaccinate the dog for the same reason,” said New York vet Stephanie Liff. “But we’ve never diagnosed autism in a dog. I don’t think you could.”

You couldn’t, because it doesn’t exist.

Much of this latest chapter of anti-vaxxer conspiracy theory can be traced to John Clifton and his website “Stop the Shots.”  Clifton argues that pets are being given too many vaccinations and blames them for his dog getting cancer because his vet advised against vaccinations after chemotherapy. This is a routine recommendation because of the toll chemotherapy takes on the immune system, not because vaccines cause cancer or anything so serious. But Clifton made his website anyway.

Vaccinating pets regularly, especially those who go outside, is essential in preventing dangerous diseases like rabies. Cases of rabies in pets and humans have plummeted dramatically ever since the rabies vaccine for pets became mandatory in the U.S. and beyond. Although humans infected with rabies can be saved if treatment starts soon enough, the CDC estimates that 59,000 people die worldwide every year from rabies infection, and they state that the best way to stop rabies deaths is to vaccinate pets properly.

There is no scientific evidence to support the idea that vaccines cause autism in humans and no evidence that autism occurs in any animals other than humans, and the scientific consensus among vets is that any risks and temporary side effects from vaccines are outweighed by the many benefits. However, vets in New York are still seeing a decline in the number of pet owners regularly vaccinating their pets as they should.

Regular people, meanwhile, are concerned and more than a little irritated.

If youre an anti-vaxxer I can see the rhetorical dilemma of vaccinating your pets if you don’t vaccinate your children, but lol we’re all going to die of rabies because of these people pic.twitter.com/AsAHFQNyud

My son told me tonight there is such a thing as pet anti vaxxers who don't vaccinate their pets because they believe vaccines will give their pets autism and I want to set something on fire.

Damn, every cat has autism

My dad just rolled over in his grave. He was a veterinarian.

So, I encountered my first pet anti-vaxxer today. Claimed that vaccines cause seizures and autism in dogs…

Hey… Hey lady…. Dogs can't have autism. The only thing you're doing is making sure your pet dies of rabies. Congratulations, you mendacious cow.

I just learned that there is a nascent pets anti-vaxxer movement and I'm logging off this world indefinitely. ????

If the anti-vaxxer movement hadn’t reached peak stupid with morons like Pete Evans & Taylor Winterstein it has now expanded to pet vaccinations. Loony anti-vaxxers aren’t deterred by the fact that veterinarians haven’t even detected autism in pets https://t.co/5PbQC9lb4g

Somehow I am still surprised at the level of stupidity in the world today. This needs to be classified as animal cruelty, and anyone who says this immediately has their animal taken from them.

I’m glad Charles Darwin isn’t around for 2019, fools are out there trying to prove that the law of natural selection is fake news ????

Love to invite these idiots to rural Australia with their dogs and see what happens when they contract parvo and kennel cough. Or maybe to a country that has rabies mmmm nice way to die ! Or their child gets bitten by their dog that has rabies !!

The cat’s expression sums up my view on the subject entirely.

Unfortunately some people are terminally stupid and there's no vaccine for that.

Apparently we shouldn’t have been using “but you vaccinate your pets” as a gotcha for anti-vaxxers.