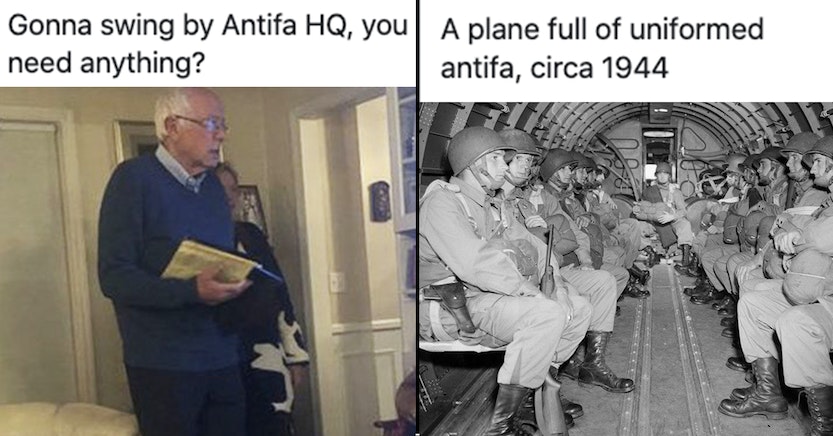 In what may be the latest instance of a right-wing self-own, earlier this week, conservative commentator Chuck Callesto claimed in a tweet that Senator Rand Paul (R-KY) was planning to crack down on Antifa, which resulted in a number of amusing “Antifa HQ” memes on Twitter.

Antifa, as most are already aware, is the grassroots political movement that quite literally stands for anti-fascist—as in, those who oppose authoritarian dictatorships. You know, essentially the same principle the United States of America was founded on?

Although Paul recently spoke out about being “attacked by an angry mob” of “over one hundred people” on the final night of the RNC—who may or may not have been associated with the Antifa movement—there is no evidence whatsoever that the senator is gonna subpoena sh—t.

For starters, how can he? Unlike fringe right-wing militia groups like the Proud Boys, there is no brick-and-mortar organization for Antifa. In fact, even the domain Antifa.com currently redirects to the campaign website for Joe Biden—though Biden is in no way involved, and it’s likely the work of a troll.

As such, it wasn’t before long that “Antifa HQ” memes began trending on Twitter, as the very concept of such a headquarters is a laughable notion in itself.

Gonna swing by Antifa HQ, you need anything? pic.twitter.com/O1owKuirlP

me and my girlfriend stopping by antifa HQ for some face masks, right after getting iced coffees at the LGBT community (same building) pic.twitter.com/ZM3gvWbLbA

Feds getting ready to bust in to Antifa HQ .. pic.twitter.com/EznNKQeUeL

The supporting responses are delightful. The bookkeeping department at antifa hq is in deep trouble.
Which reminds me, rioters and thugs, please remember to keep all your receipts! https://t.co/lEe3wADkiq

Antifa HQ is trending, they're on to us, cancel the book reading sessions, hide your knitting equipment, delete your cute animal gifs

When I fly to pick up my Soros money at Antifa HQ, I use #AntifaAirlines. pic.twitter.com/r9bNOODNN5

Others pointed out solemn reminders that before President Donald Trump fashioned himself a wannabe dictator (though he gets closer to the real thing every day) being Antifa was actually a good thing, and that any proposed Antifa HQ should be smack dab in the middle of Washington D.C.

FYI: the US government should be anti-fascist.

FYI: The White House SHOULD be Antifa HQ.

If your interested in visiting Antifa HQ, in addition to Antifa Air, they also offer cruises. pic.twitter.com/BPal6ttz3g

I found the ANTIFA Leader! His last known ANTIFA HQ address was:

Clearly, this has changed... pic.twitter.com/1e5mRQ8kBc

Antifa HQ
is located at the WWII cemetery

My Dad was ANTIFA, fought in WWII

A plane full of uniformed antifa, circa 1944 pic.twitter.com/8V0CDmb4hQ

Someone needs to frmind @RandPaul that once upon a time, this was Antifa HQ. pic.twitter.com/Lxo9id4NFU

Following the nationwide unrest that erupted over the killing of George Floyd, Trump announced plans to declare Antifa as a terrorist organization, despite the fact that he has no practical reasons or legal ways of doing so. In the meantime, let Antifa HQ be whatever and wherever you want it to be.