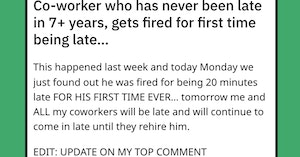 Sometimes (a lot of times) management at a company is so unreasonable that workers have to take action, much like this Reddit user and their coworkers after a longtime coworker was fired for being late for the first time ever.

OP posted to the r/Antiwork subreddit to vent their frustration after their coworker was fired. The reason? He was 20 minutes late, and it was the first time he was late for work in over seven years of working for the company. His coworkers decided to take a stand, according to the Redditor, and demonstrated by all arriving late for work the following day. The user said they “will continue to come in late until they rehire him.”

In a follow-up comment on the post, OP added that their coworker was the only one at their company who knew how to do his job, and because of that “now we will be ‘behind’ because stuff isn’t done because we can’t do it because we don’t know how.”

In an edit to the post, the Redditor posted a second update to explain management’s response to everyone running late to work… and they weren’t impressed, to say the least.

“We came in late, I was 22 min late and our manager was not happy,” they wrote. “He asked if everyone was stuck at traffic or something and one of the workers w most experience (5yrs in the company) said ‘unfair treatment for being late is not something we want’ and then me and another co worker said that we just straight up worried that because of a mistake or slip up we can be fired and then 2 other co workers they are older so kinda close minded AND don’t work on the floor (office people) w all the other 13 mechs said that ‘that’s how life is.’”

They went on to say that the team “set in stone that were not disposable, we all have a job and a certain area that we are all good at […] so it’s like we just gotta depend on one another.”

It isn’t clear if the painter will come back to their company, although the Reddit user said he had been asked to come back, though he may look for a company where his skills are better appreciated.

“Mission accomplished as we had a grown talk about our concerns and the painter might comeback and if not I’m sure he’ll find a job easily, he’ll stay in touch with us thru the chat,” the Redditor ended the post.

Commenters shared their own ridiculously demanding manager experiences in response.