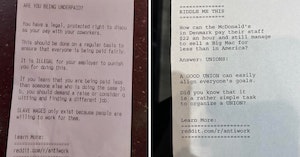 Workers across the U.S. have begun to find that their store receipt printers are randomly printing off pro-labor and pro-union messages as “hackers” use a wireless printing trick to spread these sentiments to those who need it most—the underpaid, undervalued, and overworked. The receipts, which encourage workers to discuss their wages, demand better for themselves, and value themselves outside of work, very often direct the reader to the Reddit “Antiwork” forum, which has exploded in popularity in recent months.

“ARE YOU BEING UNDERPAID?” asks one such receipt posted to Twitter. “You have a legal, protected right to discuss your pay with your coworkers. This should be done on a regular basis to make sure everyone is being paid fairly. It is ILLEGAL for your employer to punish you for doing this.”

The receipts are, in fact, correct. In order to protect workers from wage discrimination, considering the fact that certain groups of people in the U.S. tend to get paid a lot less than others, employers are prohibited from stopping their employees from discussing their pay with each other. Regardless, many companies push policies discouraging or even explicitly prohibiting this type of discussion at work, likely knowing that the discovery of pay disparities is the first step toward someone getting a pay raise or quitting, or even better, a union forming.

Posts on Antiwork showing more of these receipts often earn high praise, and many workers who have discovered them on the job have expressed amusement or delight over them. In addition to encouraging pay comparisons, they encourage readers to look into forming unions and demanding a minimum wage of $25 per hour, arguing that a worker’s time is their “most valuable asset.”

“I’ve received about 4 different messages at random times over the last week at work,” wrote one worker on Reddit. “Very inspiring, encouraging, and fun to see my boss’s face when he has to rip them off the printer.”

The printer “hack” is actually a fairly simple method of exploiting insecure printers. According to cybersecurity company founder Andrew Morris, it involves the wireless mass spamming of printing requests to certain printers able to receive these orders.

“Someone is using a similar technique as ‘mass scanning’ to massively blast raw TCP data directly to printer services across the internet,” he told Vice. “Basically to every single device that has port TCP 9100 open and print a pre-written document that references /r/antiwork with some workers rights/counter capitalist messaging.”

Morris believes the people doing this are using as many as 25 IP servers for these spam requests so employers can’t make it stop by blocking the one IP a receipt came from. He has also confirmed that he has been able to see this traffic targeting insecure printers, countering claims that the whole thing is a hoax and people are just printing their own receipts with these messages for “clout.” He believes thousands of receipt printers are exposed.

While the person or persons doing this could potentially face legal problems if they’re caught, the overwhelming sentiment from the public appears to be on their side.