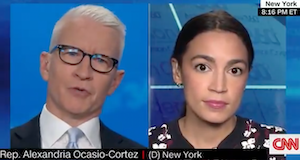 AOC’s slam comes on the heels of Abbott’s public defense of the new, controversial Texas law that makes it illegal for a pregnant person to have an abortion past week 6 of pregnancy—with no exceptions provided in cases of rape or incest.

AOC expressed indignation on behalf of most Americans, contending that Abbott speaks, “a place of deep ignorance … that is hurting people across the country.”

“I’m sorry we have to break down Biology 101 on national television,” she told Anderson Cooper, “but in case no one has informed him before in his life, six weeks pregnant means two weeks late for your period. Two weeks late for your period for any person, any person with a menstrual cycle, can happen if you’re stressed, if your diet changes, or for really no reason at all. So, you don’t have six weeks [to get an abortion].”

Planned Parenthood has confirmed that 85% to 90% of Texans who need abortions are at least six weeks along in their pregnancies.

AOC had more to say on Twitter, firing off both facts and analysis.

Many Twitter users agreed. Some pointed out that being anti-choice does not equal being “pro-life.”

Some were impatient, agreeing with her rhetoric but frustrated with Washington Democrats’ passivity.

Other politicians, such as Julian Castro, expressed disgust with Abbott as well, calling him a liar.