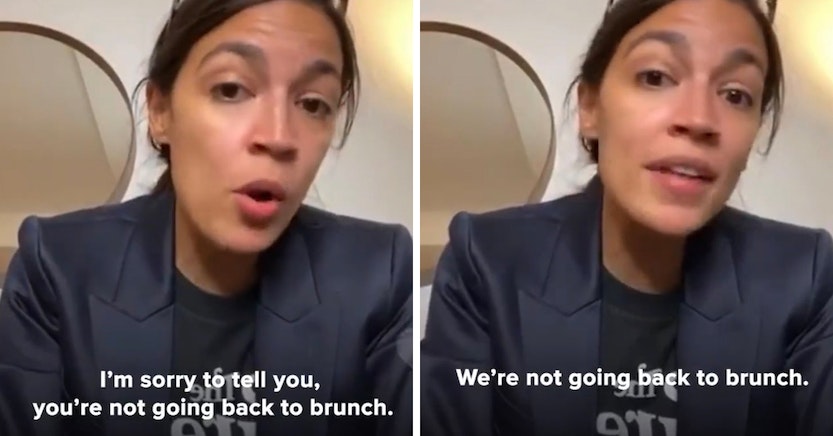 On Friday, the country found out that Supreme Justice Ruth Bader Ginsburg had died at 87-years-old, from complications relating to cancer. The news is brutal for admirers of RBG, her family, and friends, but it’s generally terrifying for anyone not in the GOP.

Ginsburg will be replaced, her seat given to someone who will make decisions on the direction of this country for life, and it looks like the Republican Party and Mitch McConnell are going to do everything under their power to have that person chosen by the Trump administration.

It’s very hard not to feel defeated, but Alexandria Ocasio-Cortez logged onto social media to talk with the American public about why it’s important to maintain hope in this moment.

“It’s a really incredibly sad day and evening,” she began at the start of her 40 minute long Instagram Live video. “On today of all days, Rosh Hashanah. Ruth Bader Ginsburg, as the first Jewish woman to sit on the Supreme Court, to pass on such a high holiday just adds even more weight and significance to this moment, particularly for our brothers and sisters in the Jewish community that are feeling the duality of that.”

She continued, “I wanted to hop on because a lot of people were reaching out to me on Twitter and publicly and privately saying, ‘What now? What do we do? I’m scared.”

“This kind of vacancy and this kind of tipping point is the difference between people having reproductive rights and the government controlling people’s bodies for them,” she said.

But she didn’t stop there. She offered up her perspective on why it’s so important to mobilize this November, to vote, and to not give up even when we feel at our most exhausted and defeated.

“I want to hop on tonight to talk to you about why now—this moment—is not the time for despair,” she said.

And while she understood that there are people out there who are disaffected by the choices on the ballot, the consequences of the election are extreme.

During any other election year, I might say that’s hyperbole. This year, check your registration, and your family’s and your friends. And get ready to fight on every front, because it’s not over yet.