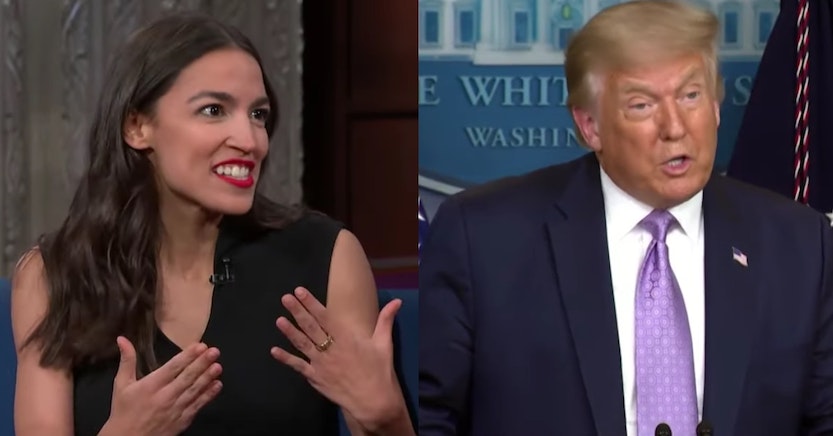 The GOP continues to take potshots at Alexandria Ocasio-Cortez every chance they get, and she never fails to have the best responses.

President Trump went on Fox Business Thursday to make a variety of outlandish claims against Joe Biden and Kamala Harris, but also swung at AOC at one point during the process.

“AOC was a poor student, at— I mean, I won’t say where she went to school, it doesn’t matter. This is not even a smart person, other than she’s got a good line of stuff. I mean, she goes out and she yaps,” he said.

The New York Congresswoman was having none of Trump’s bluster, and offered up a proposal.

“Let’s make a deal, Mr. President,” she wrote. “You release your college transcript, I’ll release mine, and we’ll see who was the better student. Loser has to fund the Post Office.”

The random pivot towards talking about Ocasio-Cortez’s time as a student makes it seem as if maybe Trump is still smarting over the recent claim by his niece, Mary Trump, that the failed businessman paid somebody else to take his SAT. We certainly know how desperate he is to be seen as intelligent, considering all the effort he’s put into bragging about passing a “very hard” test intended to catch signs of dementia.

But while Ocasio-Cortez can certainly hold her own against Trump and his ilk, supporters had her back all the same.

Of course, Trump will never accept AOC’s challenge. Having to admit he isn’t (anywhere near being a) genius AND having to stop sabotaging the post office so that the United States might actually have a fair and accessible election? Well, we can dream.