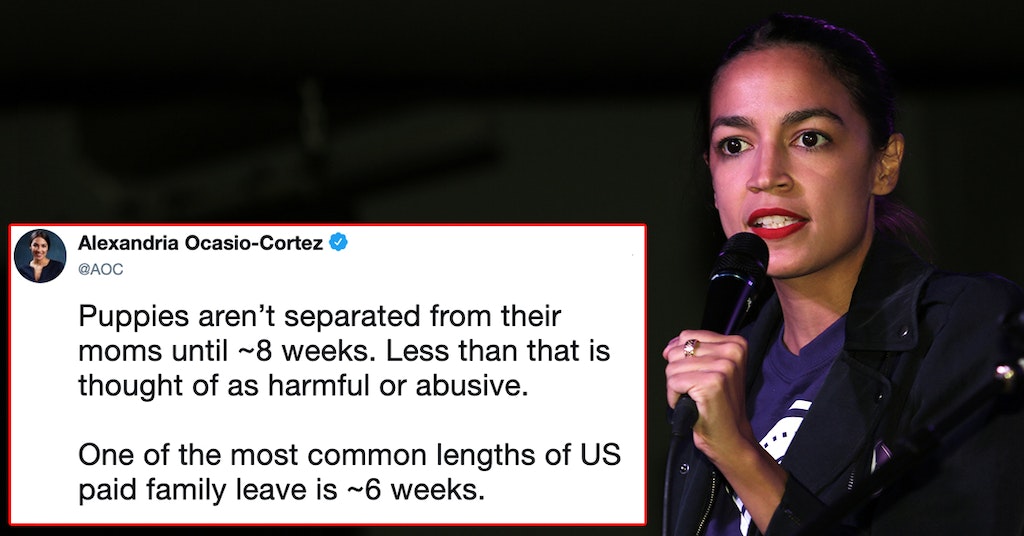 AOC: Dogs Get More Time With Puppies Than Mothers Do With Newborns

For her remarks on paid parental leave, Congresswoman Alexandra Ocasio-Cortez (affectionately known as AOC) turned to what humans can relate to most: dogs.

In a House Oversight and Reform Committee on paid family and medical leave, the fourth-most tweeted about politician in the world compared what the United States offers to new parents to the time span a puppy stays with its mother.

“Six weeks. Do we know how long puppies are allowed to stay with their mothers after a dog has given birth?” Ocasio-Cortez said.

The number is six weeks—a whole two weeks longer than what a fraction of Americans currently get. That’s if new parents can even get access to paid leave. In the hearing, AOC brought up the statistic that 80 percent of U.S. families do not even have access to paid parental leave and reiterated that new parents deserve dignity.

“So the market has decided that women and people who give birth deserve less time with their children than a dog,” Ocasio-Cortez said. “I think that that, at its core, has shown that the market has failed to treat people with dignity and basic respect. So when that happens, I think it’s our job as the public to redefine the rules of society and to treat people who give birth with the dignity they deserve.”

Puppies aren’t separated from their moms until ~8 weeks. Less than that is thought of as harmful or abusive.

One of the most common lengths of US paid family leave is ~6 weeks.

So yes, when we “let the market decide”on parental leave, “the market” treats people worse than dogs. https://t.co/Pc14ypHHJF

And added she is for six-to-12 months of paid parental leave.

At a bare minimum, we need to fight for 3 months paid family leave in the United States.

Ideally, I believe we should have 6-12 months of paid leave – just as many other industrial nations do.

People were quick to call her out on the comparison.

Humans raise offspring for at least 18 years. Dogs are separated permanently. Dogs socialize dogs so they can be of service to humans. A human socializing a dog who has not been socilaized by the pack is difficult and may not work. Also humans have frew will to remain in home.

And @aoc compares people to a dog. Humans have far greater capacity to care for their children. 6 weeks is acceptable, others provide more. Humans have the right to choose. #socialism is a looser. https://t.co/VNYULZ13Mc

While others appreciated her words.

it is disgusting that in the wealthiest society in human history the absolute minimum amount of paid family leave recommended for the health of women and children is not guaranteed.

current law only mandates *unpaid* leave be offered – at companies with more than 50 employees. https://t.co/PVAFbwK2yo

THIS! When I worked in daycare the hardest part was seeing how tortured some of the mothers were about leaving 6 week old babies with us. Paid maternity leave should be at MINIMUM 3 months. You shouldn't have to choose between working and a newborn baby. https://t.co/9YGkbvLNKs

My mom cleaned houses in the US for years as a Salvadoran immigrant and she always said – “it is better to be born a dog in the US” “mejor nacer como perro en este país” – she started work again 3 weeks after giving birth to my sis. #protectwomen they are #halftheEconomy #sdg5

If it is passed through Congress, the measure would give more than two million federal workers 12 weeks of paid leave to care for their newborn child.

Of course, this is the Trump administration we’re living in, so there’s obviously a catch. In order to move forward with paid parental leave, Space Force must be created as the sixth branch of the military. K.