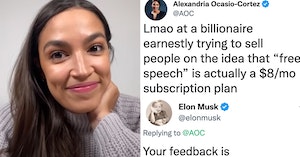 Elon Musk isn’t winning himself any new supporters after his $44 billion purchase of Twitter. Rightwingers are turning on him for not immediately turning the platform into unchecked chaos, his critics are vocally unhappy with the new changes he’s talking about implementing, celebrities are deactivating en masse, advertisers are fleeing, and employees of the company are actively suing him.

And now he can add a public feud with Alexandria Ocasio-Cortez to the ever-growing list of woes.

AOC was among those who criticized Musk over his plan to charge $8 per month for verification and priority positioning in search and replies, suggesting that it runs counter to his insistence that Twitter should be all about “free speech.”

Musk’s proposed changes to Twitter’s verification program are something many worry will exacerbate the problem of misinformation on the platform. Basing verification on who wants to pay for the privilege rather than whose identity needs to be confirmed to avoid misattribution ultimately both reinforces a class system and creates the potential for abusing the concept of verification as it currently exists across social media platforms.

Rather than engage with these legitimate concerns, or spend time figuring out how to make his newly purchased company profitable in other ways, Musk soon replied to AOC himself with a demand she simply pay $8.

Proving that he absolutely fails to miss the point of why people are upset, the billionaire then criticized the price point for merchandise in AOC’s online store — something that has already been a topic of conversation on multiple occasions, and which the Congresswoman had no problem shutting down.

Both Musk and AOC are polarizing figures in their own right, and Musk fanboys defended him just as vehemently as people who don’t believe the ultra-wealthy should be controlling both mainstream and social media agreed with Ocasio-Cortez’s criticisms. And if there is any validity to the idea of the latter’s Twitter being throttled due to her comments, it paints a more immediately devastating picture of what social media under Musk’s control might look like.

And even if there isn’t, things are still looking pretty bleak.