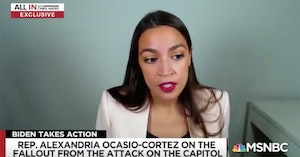 “It increasingly seems, unfortunately, that in the House Republican caucus, Kevin McCarthy answers to these QAnon members of Congress, not the other way around,” AOC said in the Daily Mail‘s account of the interview, with a not-too-subtle jab at Rep. Marjorie Taylor Greene (R-Ga.), the QAnon-friendly Congresswoman who recently filed articles of impeachment against President Joe Biden.

She called out McCarthy in particular for allowing bad actors free rein.

“This term, there are legitimate white supremacist sympathizers that sit at the heart and at the core of the Republican caucus in the House of Representatives, and when you see someone like the House minority leader, Kevin McCarthy of the Republican Party, respond to white supremacist vitriol coming with his own members not with censure like they did with Rep. Steve King (R-Iowa), not with being stripped of committees, not with any consequence, you have to wonder who actually has that power,” Ocasio-Cortez said in the interview.

She also name-checked Rep. Ted Yoho (R-Fla.), who gained infamy by calling AOC a derogatory name, in her concerns about McCarthy’s caucus leadership.

Sawyer Hackett called attention that that portion of the interview in a tweet, saying, “I’ve seen Kevin McCarthy ‘pull someone aside for a talking to’ and that representative was Ted Yoho of Florida. He pulled him aside to essentially excuse his behavior.”

As the Daily Mail pointed out, she said McCarthy didn’t just excuse his behavior, but “allow[ed] it, and abet[ted] it.”

Axios reported that McCarthy is being “tested” in particular by a recent round of reports about past controversial comments from Greene, including floating the idea of executing the Speaker of the House, Rep. Nancy Pelosi (D-Calif.), for “treason,” and alleging that the Parkland school shooting was “staged.”

“These comments are deeply disturbing and Leader McCarthy plans to have a conversation with the Congresswoman about them,” a spokesperson for McCarthy told the publication in an emailed statement.