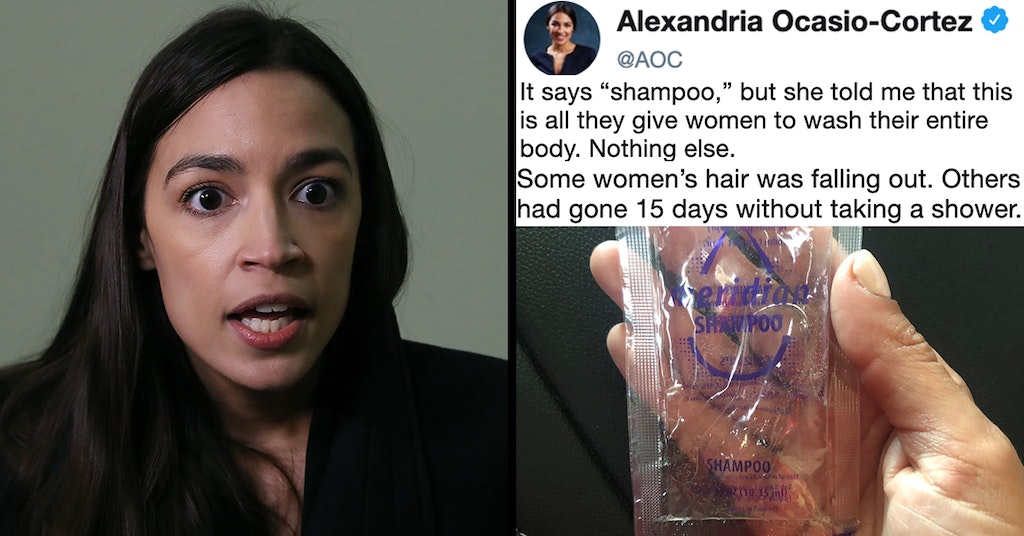 10 Horrifying Things We Just Learned About The Concentration Camps On The U.S.-Mexico Border

In light of new revelations into the conditions inside what can only be called migrant concentration camps on U.S. soil, multiple Democratic politicians have visited these facilities and are reporting what they saw and heard on the inside on Twitter. The results are as horrifying as you could imagine. Don’t look away.

Just left the first CBP facility. The conditions are far worse than we ever could have imagined.

15 women in their 50s- 60s sleeping in a small concrete cell, no running water. Weeks without showers. All of them separated from their families.

This is a human rights crisis.

Representative Alexandria Ocasio-Cortez has been particularly vocal about her visit to multiple detention facilities for migrants over the past few days. Additionally, Congress members Ayanna Pressley, Madeleine Dean, Rashida Tlaib, Judy Chu, Lori Trahan, and Joe Kennedy III have been inside these camps and are tweeting about it. The general consensus seems to be that conditions on the inside are horrific, but there are a few key takeaways that every American should keep with them.

1. What they saw was not the worst of it.

According to Rep. Kennedy, U.S. Customs and Border Patrol (CPB) were highly uncooperative and attempted to restrict what the visiting Congress members saw inside these facilities. That likely means that even though what they saw was terrible, there are worse conditions in the areas they were not allowed to see.

Just left the first CBP facility. The conditions are far worse than we ever could have imagined.

15 women in their 50s- 60s sleeping in a small concrete cell, no running water. Weeks without showers. All of them separated from their families.

This is a human rights crisis.

2. The inmates who spoke up will be punished for it.

Rep. Ocasio-Cortez reports that multiple women she spoke to inside the camps told her that they will be punished for speaking out, and all began crying when they told her this.

What’s haunting is that the women I met with today told me in no uncertain terms that they would experience retribution for telling us what they shared.

They all began sobbing – out of fear of being punished, out of sickness, out of desperation, lack of sleep, trauma, despair.

3. Detained migrants are being abused.

Rep. Dean reports that detainees are “constantly abused and verbally harassed with no cause.” This is unacceptable, yet not surprising considering the content that was found in a secret Facebook group for Border Patrol agents with over 9,500 members.

We were met with hostility from the guards, but this is nothing compared to their treatment of the people being held.

The detainees are constantly abused and verbally harassed with no cause. Deprived physically and dehumanized mentally – everyday.

This is a human rights issue.

4. Migrants are also being tortured.

Ocasio-Cortez further reported that the women she talked to spoke of “psychological warfare” including being woken up in the middle of the night for no reason. Sleep deprivation is a common form of torture.

After I forced myself into a cell w/ women&began speaking to them, one of them described their treatment at the hands of officers as “psychological warfare” – waking them at odd hours for no reason, calling them wh*res, etc.

Tell me what about that is due to a “lack of funding?”

5. Detainees are being denied their basic needs.

According to U.S. law, the basic needs necessary to sustain life are “adequate food, shelter, and clothing plus some household equipment and furniture,” and “safe drinking water, sanitation, health and education.” We already knew that the migrants inside these detention centers are being denied the supplies necessary for sanitation, but Rep. Chu reports that women asking for water are being told to drink from toilets, which is absolutely not a source of safe drinking water.

"If you want water, just drink from a toilet." That's what border patrol told one thirsty woman we met on today's #DemsAtTheBorder trip. These are the same CBP personnel who threatened to throw burritos at members of Congress. Changes must be made. #DontLookAway pic.twitter.com/dW34DRduDA

6. The CPB agents working at the detention centers are just as bad as the ones in the Facebook group.

When Ocasio-Cortez asked the agents’ superiors why the agents were laughing about detainees drinking out of toilets, she was told that they’re “under stress” and so they “act out.” Are they children? Better question, isn’t it a problem if working in one of these facilities causes so much stress that it causes you to laugh at people forced to drink out of toilets?

Now I’ve seen the inside of these facilities.

It’s not just the kids. It’s everyone. People drinking out of toilets, officers laughing in front of members Congress.

I brought it up to their superiors. They said “officers are under stress & act out sometimes.” No accountability.

7. It’s not just children who are suffering.

It’s normal to feel more sympathy for children who are suffering than for adults, because we tend to view them as innocents who need our protection, and rightfully so. But the detained adult migrants are suffering just as much, and we need to help them, as well.

We can't just focus on the children anymore. I met grandmothers, mothers and fathers who are suffering. This is devastating. The look in one father's eyes broke me. I can't look away. #CloseTheCamps

8. As temperatures soar, most of the detention centers do not have air conditioning.

Though Rep. Tlaib was told that some of the facilities she visited have air conditioning available, there are tent cities and other shelters that do not. The hottest parts of summer are yet to come, and leaving people to swelter in tents and warehouses without clean water to drink is a recipe for death.

Here's an update from our first stop. We must remember the humanity of people who are here—and the inhumane treatment they are being subjected to. Stay tuned for more updates. #DemsAtTheBorder pic.twitter.com/16cmgCwWhv

9. Border Patrol does not want you to see any of this.

Multiple representatives reported that their phones were confiscated before they could enter the facilities and they were generally prohibited from taking photos or video footage. If your government doesn’t want you to see something, there’s a good chance it’s because they’re doing something wrong.

But they can’t hide forever.

CBP made us check our phones.

But one woman slipped me this packet to take with me.

It says “shampoo,” but she told me that this is all they give women to wash their entire body. Nothing else.

Some women’s hair was falling out. Others had gone 15 days without taking a shower. pic.twitter.com/OsaKS0YD9a

10. You can and should do something about this.

All members of Congress should be visiting these concentration camps to see with their own eyes how their fellow human beings are being treated just for seeking a safe place to live for themselves and often for their children. Call them. Email them. Demand that they speak out against these horrific human rights abuses.