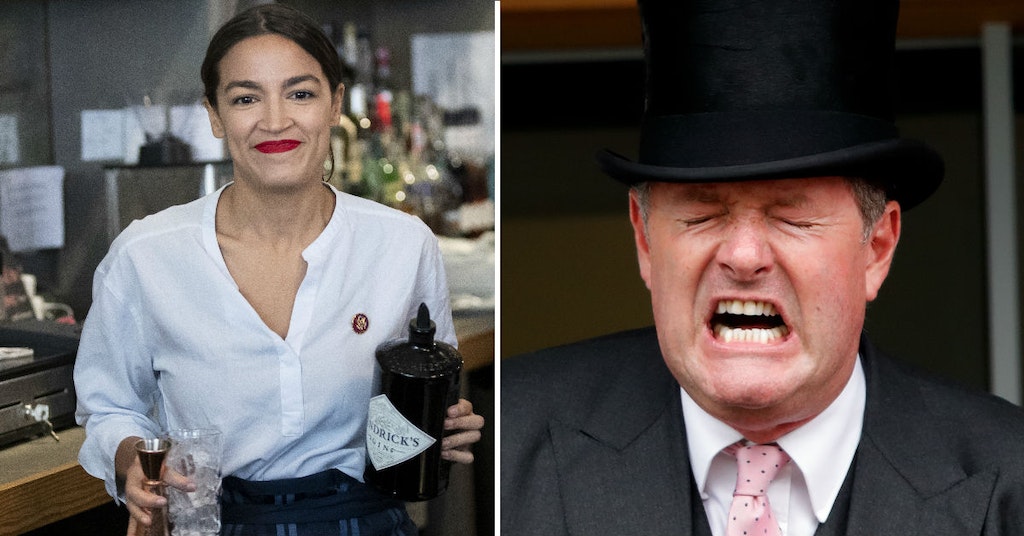 After Representative Alexandria Ocasio-Cortez (AOC, fondly) expressed concern over the fact that Ivanka Trump was being brought along or even sent in her father’s place to important international meetings with essential allies, certain conservatives predictably used it as an opportunity to attack AOC over her past as a bartender. This is not the first time they’ve pulled this, and the young congresswoman’s response is the same.

Actually, that would make government better – not worse.

Imagine if more people in power spent years of their lives actually working for a living.

We’d probably have healthcare and living wages by now. https://t.co/HoxIyu6ftj

Piers Morgan was responding to Ocasio-Cortez’s tweet saying that “being someone’s daughter actually isn’t a career qualification.” Luckily, Ocasio-Cortez was involved in politics for years while supporting herself with her bartending job, making her plenty qualified to be a representative for her district. She might not be entirely qualified to go to G20 and speak with world leaders, but she’s not the one doing that, is she?

AOC herself had a better and more concise response to accusations that she wasn’t qualified to be a congresswoman, using a simple image to illustrate her qualifications.

For the record, Ivanka’s resume prior to 2016 is filled with her sub-par fashion line, modeling, TV appearances, and writing self-help books.

Later, AOC put the issue to bed by stating that she is proud of the hard work she did as a bartender while also laying out her actual political experience and calling out Republicans for classism.

Working people that GOP dismiss as “just a waitress/cook/etc” contain multitudes, & are just as capable & intelligent as anyone.

Classism – judging someone’s character by their income – is disappointing to see from them.

What is so appalling to GOP about having an honest job?

In other words, Republicans who criticize my being a waitress as evidence of lacking skill can take their classism to the trash.

You are insulting the capacities and potential of virtually every working person in America (&the 🌎) for having experience that’s earned, not bought.

Is the GOP the party of the working American or isn’t it? They make the answer to that pretty clear with their own actions and public tweets on a daily basis. Right now, a lot of working-class people are loving AOC and, as always, hating Piers Morgan.

Bartending is a heck of a lot more respectable than being born into a crime family only to continue the legacy of grifting and sleazing.

The world needs bartenders, not FAF posers who pretend to care. ???? pic.twitter.com/Gz1FomBRfI

I’ll go to war with a well educated and very intelligent bartender any day over an incompetent product of legacy mediocracy that has no idea how the real world and its people operate.Wish all of Congress came from working and middle class backgrounds.

When a Republican says you have to climb your way up, it means:pay someone off, sleep with someone, have connections with someone who can get you through the door.

They didn’t mean you have to work hard and be a good person who cares about other people! That’s just too shameful.

Wait.
You mean to say you actually PREPARED yourself for a role as an elected official?
Just like in the olden days when HONOR & not GREED was the #AmericanWay?
Who knew such things still happened in today’s America…
:gentle bow of respect:
:applause, applause:

We love you @AOC ????????! @jinxster13 my wife was a bartender and she is from Queens and kicks ass in every way. You keep kicking ass with love in Washington for America!! ????We love you from Long Island. Bless you.

Its soooo interesting to me that people forget our reps are supposed to be FOR the people BY the people. Instead they'd rather have a millionaire whose never known struggle. #AOC2019 https://t.co/wgQHEyzdMm

I washed up in pubs, pulled ragwort, worked as a cleaner, delivered leaflets, worked as a waiter etc etc. Wouldn't change that for the world. It teaches you about money and hard work. https://t.co/9TZnGe10Rm

Yes. I feel like this applies to education, too. Imagine if more administrators, coaches, and policy makers spent time doing the actual work of teaching in classrooms before, *during*, and after their terms! https://t.co/wWZnRKnQ9V

I’d take someone with a working class background over a pampered, grossly unqualified Barbie who lives on (grand)daddy’s dime any day of the week.

Just imagine…there were folks who said that a community organizer had no business running for President.

And all he did was pull the economy out of a recession, save the auto industry, get Bin Laden, and give health insurance to millions of uninsured Americans.

Piers Morgan is what happens when the free pocket square you get with a Jos A Bank suit takes human form.

Conservatives: government is bad because the people in it have never had a real job and are out of touch with every day working Americans

It’s mind blowing to me that so many people use “you used to have a blue collar job” as a dig against you, after they cry about Dems being elitist.

It’s really brave of you to talk to Piers like he’s not an elitist prick with no conscience or sympathy for those less fortunate than him.

You should have to work 2 weeks in a restaurant before you can dine in one.. just so you know the real grind

Why does Piers Morgan continue to try it? It’s surprising he has time to go after AOC when he spends so much of his time responding to random people insulting him on the internet.